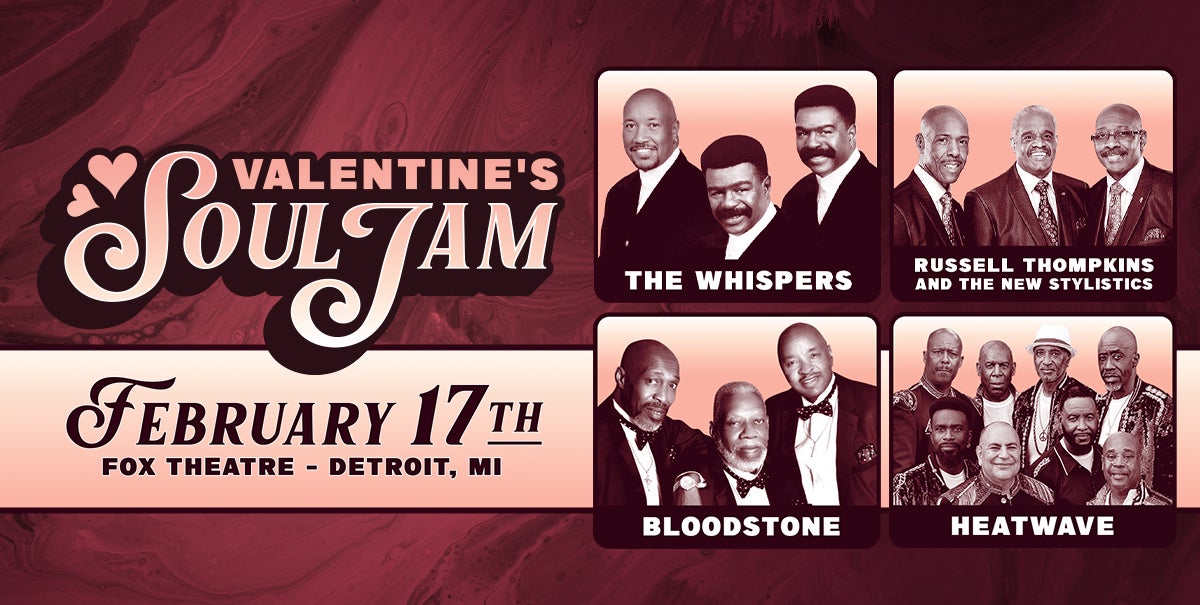 Fall in love all over again at the Valentine’s Soul Jam coming to Fox Theatre on Friday, February 17 at 8 p.m. Featuring performances by R&B soul stars The Whispers, Heatwave, Bloodstone and The New Stylistics, fans will have the chance to hear some of the greatest songs ever recorded, sung by the artists who made them famous. Comerica Bank is the exclusive presenting partner of the Fox Theatre.

About The Whispers
In the annals of R&B history, the Whispers have earned a solid and memorable position as one of the world’s longest-running vocals groups. Celebrating over 50 years in the industry, they are the cream of soul, embellishing smooth ballads and upbeat dance favorites. They have had 33 top ten hits and 20 Billboard charted albums over a span of five decades. The Whispers began their legendary career in 1964 when they first organized at Jordan high school in Watts, producing a string of hits continuing over the last five decades such as “Seems Like I Gotta Do Wrong,” “And the Beat Goes On’,” “Rock Steady,” “A Song For Donny” and “Lady.” They emerged as the leading romantic singers of their generation, racking up one gold album after another and charting 46 Billboard hits. They are the first group to be signed to Soul Train Records and earned most of their greatest hits with Solar Records. The Whispers’ music has been sampled over 131 times and their music has been featured in over 600 musical compilations. Their music has been heard on movie soundtracks such as Waiting to Exhale, Madea’s Family Reunion and Diary of a Mad Black Woman. The group has not made any personnel changes since 1973 when Leaveil Degree replaced Gordy Harmon; they still consist of Walter Scott, Wallace Scott and Leaveil Degree. The passing of Nicholas Caldwell in 2016 left them as a trio, but still stellar and powerful in their stage presence. They are one of only a few “old school” groups that can boast of having over 50 years in the industry with a worldwide fan base, maintaining their vocal dominance and original members.

About Bloodstone
Kansas City’s Bloodstone remains one of the soul music scene’s brightest and longest-burning light. Combining sophisticated vocals with elements of funk and rock; they are best known for the hit “Natural High.” Today they continue to expand themselves ceaselessly as Kansas City’s musical gift to the world. Their exemplary career has stood the test of time and their musical legacy is one that will continue to flourish for as long as there is a song to sing!

The Valentine’s Soul Jam is presented by North American Entertainment Group Inc., one of the leading independent promoters of entertainment tours and live events in the United States.