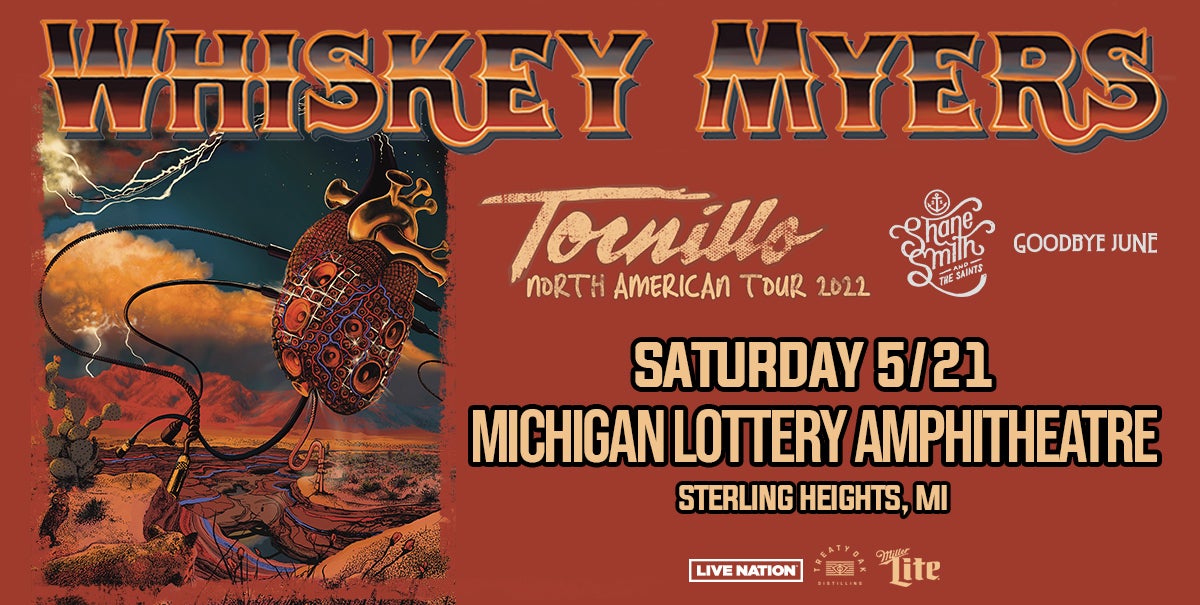 Genre-bending band Whiskey Myers will bring their “Tornillo Tour” to Michigan Lottery Amphitheatre on Saturday, May 21 at 6:30 p.m. The 41-date tour will be fans first chance to hear the band’s new music live from their forthcoming self-produced album, Tornillo, set for release July 29.

Whiskey Myers 2019’s self-titled and self-produced album offered a watershed moment. With Rolling Stone raving that the “irresistible” album was “the record the band was poised to make” while declaring them “the new torch bearers for Southern music” in a story titled “How Whiskey Myers Won Over Mick Jagger and Made the Album of Their Career;” Billboard and No Depression naming the album to best-of-the-year lists; 41,000 first week album sales; and the project debuting atop both the Country and Americana album charts (as well as at No. 2 on the Rock charts, behind only a re-release of The Beatles’ Abbey Road), the band celebrated mainstream success a decade in the making.

Now, after spending 21 days isolated at the 2,300-acre Sonic Ranch studio deep in the heart of their native Texas, just miles from the U.S./Mexico border, the Gold-certified renegades have doubled down on what they do best: sharing honest truths with no-holds-barred instrumentation, letting the self-produced music speak for itself. Yet with Tornillo, named for the border town that is home to the pecan orchard-filled recording complex and set for release on July 29 via their own Wiggy Thump Records with distribution by Thirty Tigers, the six-piece band has taken their solid decade-plus foundation and pushed themself to further explore new sonic landscapes.

“It’s going to have a little bit different sound,” lead singer Cody Cannon shared recently with Outsider. “It’s still Whiskey Myers at its core, but it’s kind of fresh… We did a lot of bass and horns on this one, which is something we’ve always wanted to do. Just being fans of all that old music and Motown stuff, and a lot of the stuff coming out of Muscle Shoals, old rock and roll.”

“We’re going to bend [genre] even more, I think, with this new record,” he continued. “It’s all over the place. But that’s fun, right? I hate the whole ‘Put it in a box. You gotta be this.’ … That’s not art to me. I love the idea of just doing, really, whatever you feel. It comes out a certain way because that’s just how it comes out. Whiskey Myers never really tried to be a certain way. It’s just how we are. So I think that’s really the whole thing about music, or the beauty about music; it’s just that freedom to create.”

Tornillo as a whole does exactly that, drawing as much inspiration from Nirvana as from Waylon Jennings – even adding the legendary McCrary Sisters’ gospel influence to the project on background vocals. With Cannon leading the way on songwriting, the album also features writes from lead guitarist John Jeffers and fellow bandmembers Jamey Gleaves and Tony Kent, as well as rising singer/songwriter Aaron Raitiere (Anderson East, Oak Ridge Boys, A Star is Born).

The first taste of that new music comes today via lead single “John Wayne” and album intro “Tornillo,” both available everywhere now with the album itself available for pre-order and pre-save HERE.

For the most up-to-date information on the forthcoming album and all tour dates, visit WhiskeyMyers.com and follow on social media @WhiskeyMyers.

Genre-bending band Whiskey Myers have played more than 2,500 live shows to ever-increasing crowd sizes since their emergence in 2007. Their forthcoming self-produced album, Tornillo, set for release July 29, follows their self-produced fifth studio album, Whiskey Myers, out now on the band’s own Wiggy Thump Records. Whiskey Myers debuted at No. 1 on both the Country and Americana/Folk sales charts, at No. 2 on the Rock chart and No. 6 on the all-genre Billboard 200 chart (No. 3 among new releases). Their previous album, Mud, reached No. 1 on the iTunes country chart with single “Stone” hitting Top 10 all genre. In total, Whiskey Myers have sold more than 1.2 million albums and amassed over 1.5 billion streams while earning three RIAA Gold certifications. USA Today describes the band led by frontman Cody Cannon as “a riff-heavy blend of Southern rock and gritty country that has earned comparisons to the Allman Brothers Band and Led Zeppelin,” with Rolling Stone noting “it’s the seminal combination of twang and crunchy rock & roll guitars that hits a perfect sweet spot.” The band known for their high-energy live show and unique sound has also earned sync success with features (and an on-screen appearance) in Paramount Network’s Kevin Costner hit show Yellowstone as well as the Renée Zellweger-led Netflix series What/If, the Angelina Jolie film Those Who Wish Me Dead and hit CBS series SEAL Team.