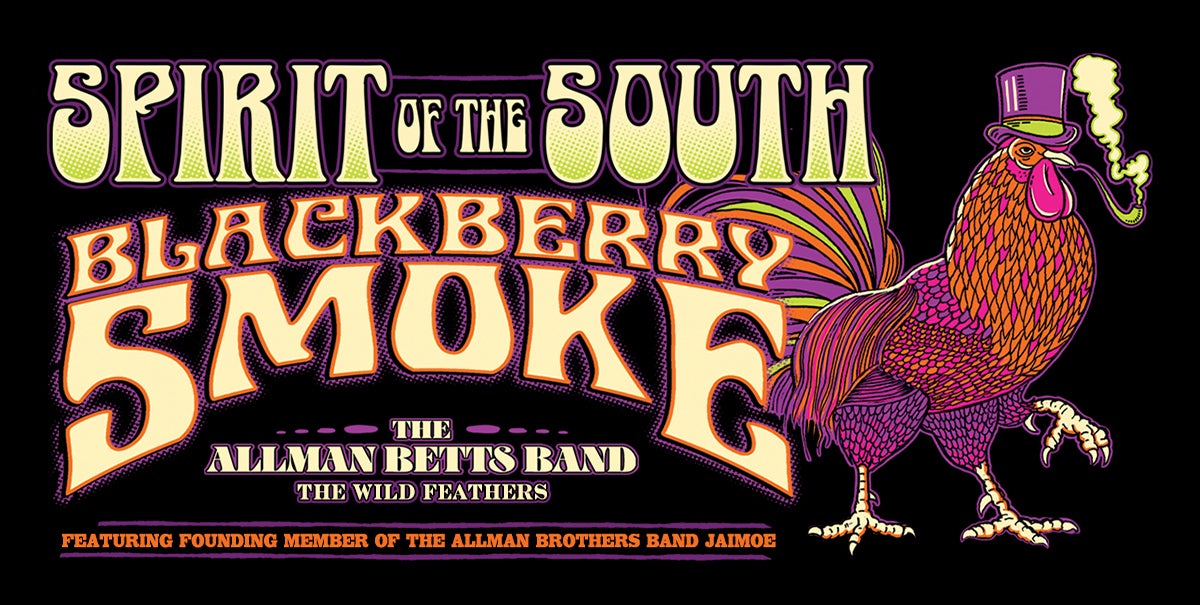 (DETROIT – March 2, 2020) – Blackberry Smoke brings the “Spirit of the South Tour” to Michigan Lottery Amphitheatre with special guests The Allman Betts Band, The Wild Feathers and founding member of The Allman Brothers Band, Jaimoe as part of the Fifth Third Bank Concert Series on Saturday, August 1 at 6 p.m.

Tickets (starting at $25 on the lawn) go on sale Friday, March 6 at 10 a.m. To purchase tickets in the Crest Ford pavilion, Ford Motor Company luxury seats and on the lawn, visit 313Presents.com,  LiveNation.com and Little Caesars Arena XFINITY box office or Ticketmaster.com.

Created in celebration of the various roots and influences within Southern music, every show will conclude with a unique collaborative finale, which will feature Blackberry Smoke, The Allman Betts Band, The Wild Feathers, Jaimoe and additional surprise guests showcasing the inspirations of Rock, Blues, Gospel and Soul music. Additionally, for the first time ever, Blackberry Smoke is partnering with The Allman Brothers Band Museum At The Big House—located in Macon, GA—to bring the band’s storied history on the road with a new mobile set up. The museum will feature never-before-seen archival items including original hand-written lyrics, awards, rare family photographs, iconic pieces of clothing and jewelry, one-of-a-kind instruments played by the band and more. Jaimoe will also be onsite at the museum and available for meet and greet opportunities at each stop. All “Spirit Of The South Tour” ticket holders will be granted free access to the museum with $1 of each ticket donated to The Allman Brothers Museum at the Big House to help preserve its history and heritage.

Of the collaboration, The Big House Museum director Richard Brent shares, “We feel privileged to have this opportunity to get out on the road and bring some of these unique items to the fans. The museum has become such an amazing place for people to gather, but it comes with a big price to maintain and expand. If you haven’t been able to get down to Macon, GA, this exhibit will give you a great visual of what we are about. You will not only get to see what we have brought out, but you also will get to learn some great stories from the songs, albums and images of The Allman Brothers Band. We know that by showing a small portion of what the ABB museum has to offer, it will inspire folks to stop by the Big House the next time they are in the Macon area.”

Additionally, of the tour, Blackberry Smoke lead singer Charlie Starr shares, “We are beyond excited to bring our “Spirit Of The South Tour” to fans this summer. If you think of this music as a genre and you step back far enough to see the scope of what a handful of bands from the South were able to accomplish, it’s pretty damn staggering. All without giving a damn about what was hip or trendy at the time. It’s music that is a part of the fabric of people’s lives…music that we all love and cherish deeply. On this tour we’d like to celebrate the musical freedom championed by those pioneers and maybe help tell the story. It’s not only what people think of as Southern Rock, but all the elements in Rock and Roll that make it Southern.  It’s blues, gospel, soul, jazz and bluegrass…everything that took root in the South and spread all over the world.  We feel this tour is going to give us all a unique opportunity for something really special. I think everyone will love the Celebration!”

The Allman Betts Band’s Devon Allman also comments, “I’ve been knowing the Blackberry cats a couple decades, we come up in the same circuit. This tour is going to be special, the sweet warm summer nights and the epic jams at the end. Can’t f***ing wait!”

The new tour adds to a landmark series of years for Blackberry Smoke, who recently returned to the studio with Grammy® Award-winning producer Dave Cobb to begin work on their next album, including a new song with Jamey Johnson. They also recently spent time at Capricorn Sound Studios in Macon, GA creating new renditions of several songs with ties to the historic studio and the town. The new music follows the release of their latest full-length album, Find A Light, which debuted as the best-selling Country and Americana/Folk album in the country, entered at #3 on the Billboard Top Country Albums chart and #2 on the Billboard Americana/Folk Albums chart in 2018. Of the album, NPR Music praises, “pushes the envelope while providing that famous Blackberry Smoke autonomy, delivered with soulful vocals, haunting harmonies and kick ass songs.” After the release of Find A Light, Blackberry Smoke released two additional projects—a live album and concert film, Homecoming: Live In Atlanta (stream/purchase here)—which debuted at #1 on Billboard’s Americana/Folk Album Sales chart—and a 6-song acoustic EP, The Southern Ground Sessions (stream/purchase here). 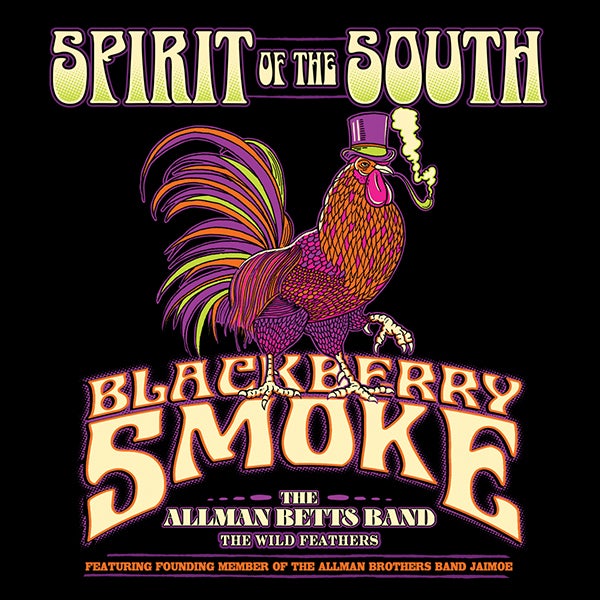 Blackberry Smoke
"Spirit of the South Tour” with special guests The Allman Betts Band, The Wild Feathers and Jaimoe

Blackberry Smoke
"Spirit of the South Tour” with special guests The Allman Betts Band, The Wild Feathers and Jaimoe
Get Tickets