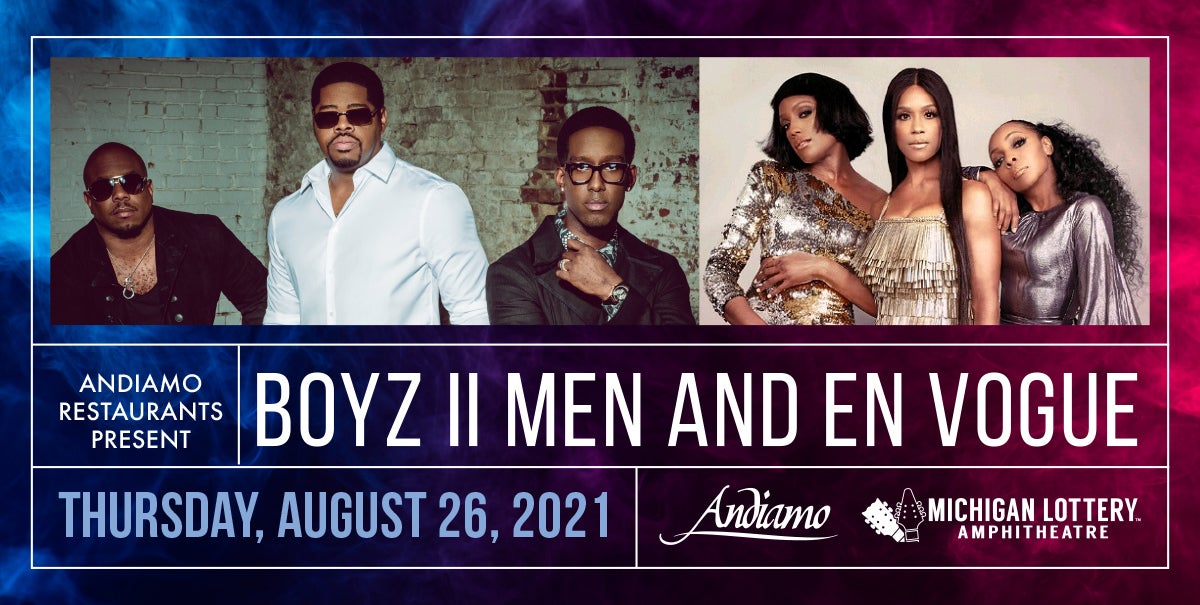 (DETROIT – June 8, 2021) – One of the most iconic R&B groups in music history, Boyz II Men, announce a performance at Michigan Lottery Amphitheatre with the legendary En Vogue on Thursday, August 26 at 7:30 p.m.

Tickets (starting at $39.80 on the lawn) go on sale Saturday, June 12 at 10 a.m. To purchase tickets in the Crest Ford pavilion, Ford Motor Company luxury seats and on the lawn, visit 313Presents.com, Ticketmaster.com or the XFINITY Box Office at Little Caesars Arena.

Boyz II Men redefined popular R&B and continue to create timeless hits that appeal to fans across all generations. The group’s four Grammy® Awards are just the tip of the iceberg: throughout their 25-year career, Boyz II Men have also won a whopping nine American Music Awards, nine Soul Train Awards, three Billboard Awards, and a 2011 MOBO Award for Outstanding Contribution to Music, a star on the Hollywood Walk of Fame, as well and a Casino Entertainment Award for their acclaimed residency at the Mirage Resort and Casino in Las Vegas, which has been ongoing since 2013.

The trio holds the distinction of being the best-selling R&B group of all time, with an astounding 64 million albums sold. And the reason is abundantly clear: for the past two decades Boyz II Men have given fans a rich catalogue of hits filled with smooth harmonies and enduring themes. And for Boyz II Men the hits just keep on coming—the group continues to craft new albums and bring their legendary act to stages across the world.

Boyz II Men’s past hits include: “End of the Road,” “I’ll Make Love to You,” “One Sweet Day,” “Motownphilly” and many others. And their recent albums have earned them major critical acclaim as well. Their Decca label debut, Motown: A Journey Through Hitsville USA (Decca/Universal), on November 13, 2007 earned them two Grammy® Nominations.

Beyond making music, giving back is also important to Boyz II Men- the group has its own charity called Boyz II Men House which lends support to individuals and organizations that focus on improving the quality of life and helping to unlock human potential, while contributing to the health and vitality of those less fortunate.

The group released a new album featuring original material through label BMG in October 2014 called Collide. Collide is a landmark album for Boyz II Men, showcasing a new and different sound for one of the most successful and enduring groups in mainstream music. Two of the tracks, “Better Half,” and “Diamond Eyes” were featured on a special episode of ABC’s hit show, The Bachelorette.

In the Summer of 2017 the group joined New Kids on The Block for the second time for “The Total Package” tour featuring Paula Abdul. In the fall of 2017, the group released a Doo-Wop album, Under The Streetlight.

Last year, Boyz II Men were nominated for a CMT Music award for their Crossroads performance of "Motownphilly" with country singer Brett Young and continued collaborations by joining forces with Steep Canyon Rangers on a bluegrass song, “Be Still Moses.” In October 2019, the trio made a cameo in ABC’s show, Schooled where they performed “Motown Philly,” a spoof on their hit song--taking it back to the ‘90s with a twist. Most recently they made an appearance on NBC hit show Songland. Their song "Love Struck" premiered at #2 on itunes.

Recognized as one of the top 5 highest selling American female music groups in history En Vogue, currently consisting of Cindy Herron-Braggs, Terry Ellis and Rhona Bennett has garnered 221 million US streams and 325 worldwide streams, with 60 million YouTube views. The group created numerous R&B and Pop smashes including “Hold On,” “Free Your Mind,” “Never Gonna Get It,” “Giving Him Something He Can Feel,” “Don’t Let Go,” and “Whatta Man” feat. Salt N Pepa).

En Vogue proved that not only could they sing, but they also had plenty to say, weighing in on stereotyping, racism and sexism, while also standing up for love and peace. Beauty, brains, talent and style defined them, not just sex appeal. And it was an unbeatable combination. One that has yielded 7 MTV Music Video Awards, 3 Soul Train Music Awards, 2 American Music Awards, a Billboard and Lady of Soul Award and countless Grammy nominations.

En Vogue’s creative freedom has always been on display. In 2004 their sixth album, Soul Flower hit the Billboard Top 20 for indie albums. In 2018, Electric Café, produced the Ne-Yo-penned Top 10 hit single, “Rocket,” and their Top 20 follow-up, “Reach 4 Me” and in 2019, they collaborated with Chance the Rapper alongside Kierra Sheard and Ari Lennox on “I Got You (Always and Forever) for his album, The Big Day. Actress and producer Taraji P. Henson tapped them to appear in an episode of the final season of the groundbreaking TV series Empire for her directorial debut. Dresses from their iconic “Giving Him Something He Can Feel,” video are housed in the Smithsonian’s National Museum of African American History and Culture (NMAAHC) in Washington, DC illustrating En Vogue’s profound impact, historically and culturally, in both music and fashion.

They recently celebrated the 30th anniversary of their debut at the Billboard Music Awards with a performance of “Free Your Mind” that reaffirmed their status as one of the top 5 girl groups of all time.   People Magazine raved, “The women pulled off crisp choreography and impressive vocal runs throughout the entire song, showing that they've still got it after all these years.” The New York Daily News stated, “En Vogue stuns Billboard Awards with ’90s anthem against bigotry: ‘Still crushing it after all these years.”  Original member Terry Ellis told ABC Radio the song speaks to the group's personal encounters with discrimination: "[There's] Sandra Bland, Breonna Taylor, and many more. So we know we're not exempt either," Ellis continues. "It's a real concern, a real fear that has to be addressed. So we'll be getting our feet on the ground at some point."

Change may be inevitable, but some things remain magically the same. Decades later, En Vogue continues to set a high standard for women in music. Their crowns remain intact. In a fickle industry, they have not only been able to “hold on,” but they’ve ascended to their “legendary” status on their own terms. 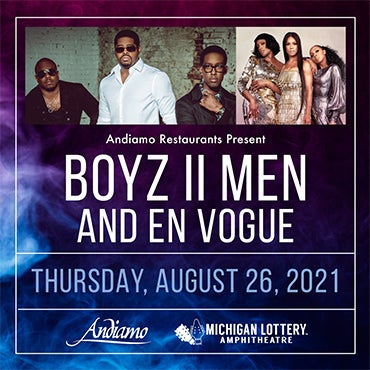