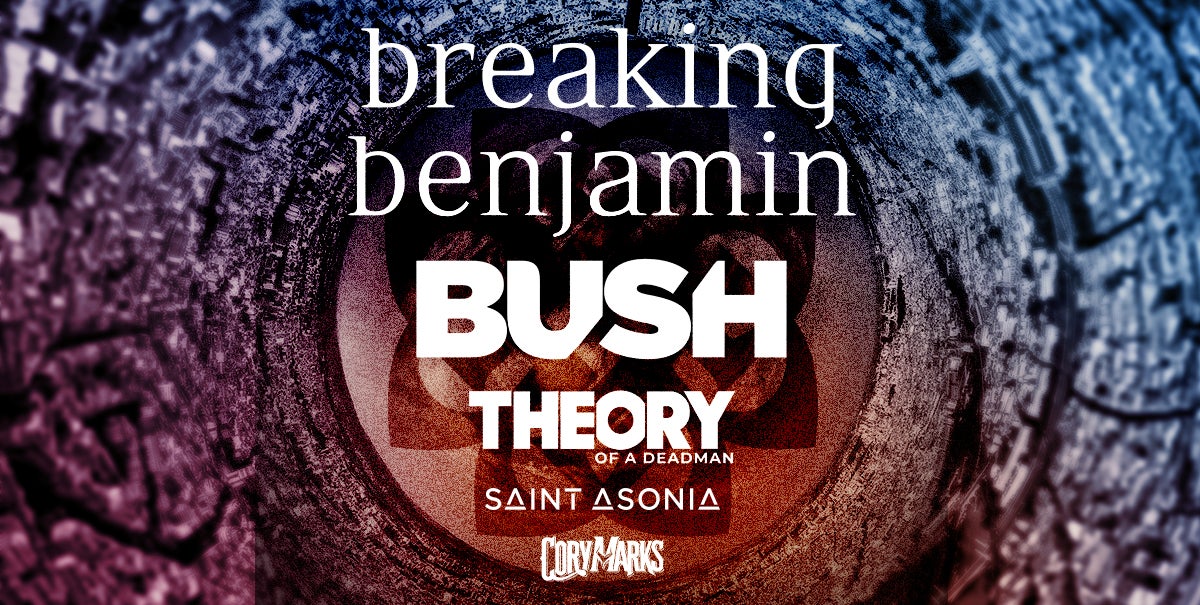 (DETROIT – March 3, 2020) – Following the recent wrap-up of their North American co-headline arena tour with Korn, multiplatinum band Breaking Benjamin have announced their 2020 US summer tour. Produced by Live Nation the tour, which kicks off July 15 with very special guest opener Bush as well as Theory of a Deadman, Saint Asonia and Cory Marks, will visit DTE Energy Music Theatre on Thursday, July 30 at 5 p.m.

Tickets (starting at $29.50 on the lawn) go on sale Friday, March 6 at 10 a.m. and can be purchased at 313Presents.com, LiveNation.com, Little Caesars Arena XFINITY box office and Ticketmaster.com.

VIP packages and tickets for Breaking Benjamin Fan Club members will be available today starting at 12 p.m. local time. Purchase ticketed VIP packages here and join the fan club here. Text ‘SUMMER2020’ to (844) 626-3736 for an exclusive pre-sale tomorrow or reserve your tickets during other pre-sale options.

Tickets to Breaking Benjamin’s Summer tour will also be available via Live Nation’s Ticket To Rock promo, a multi-show ticket including entry to other summer tours including Korn & Faith No More, Disturbed, Slipknot and Megadeth & Lamb of God. Tickets for applicable Ticket To Rock markets launch today at 12 p.m. local time @ livemu.sc/2IdREkQ.

Breaking Benjamin is touring in support of their vast catalogue and latest release, Aurora, which showcases reimagined versions of the band’s biggest and most popular songs, including “Dear Agony” as well as “So Cold” and “Red Cold River,” both of which were #1 rock radio hits. Aurora also features multiple special guests, including Lacey Sturm (ex-Flyleaf), Spencer Chamberlain (Underoath) and Scooter Ward (Cold) who joins the band on the album’s current single, “Far Away,” which is currently Top 10 at rock radio.

With a discography that includes such seminal rock albums as 1994’s 6x platinum-selling Sixteen Stone, ‘96’s triple-platinum-selling Razorblade Suitcase and `99’s platinum-selling The Science of Things, Bush has sold close to 20 million records in the U.S. and Canada alone. They’ve also compiled an amazing string of 18 consecutive Top 40 hit singles on the Modern Rock and Mainstream Rock charts. Eleven of those hit the Top 5, six of which shot to #1: “Comedown,” “Glycerine,” “Machinehead,” “Swallowed,” “The Chemicals Between Us” and “The Sound of Winter.” The latter made rock radio history as the first self-released song ever to hit #1 at Alternative Radio, where it spent six weeks perched atop the chart’s top spot. The song appeared on 2011’s “comeback album,” The Sea of Memories, which was Bush’s first studio album in 10 years. That year Billboard ran a story about the band under the headline, “Like They Never Left” – a fitting title as the multi-platinum quartet (vocalist/songwriter/guitarist Gavin Rossdale, guitarist Chris Traynor, bassist Corey Britz and drummer Nik Hughes) promptly picked up where they left off. They’ve continued to dominate rock radio and play sold-out shows to audiences around the world ever since. The Kingdom follows 2017’s Black And White Rainbows, which People magazine hailed as “a triumphant return.”

About Theory of a Deadman

Multi-platinum band Theory (Theory of a Deadman) recently released their seventh studio album Say Nothing (Atlantic Records) featuring #1 Rock Radio single “History of Violence.” The powerful song, which turns the tables on a story of domestic violence, has racked up more than eight million collective streams and marks Theory’s sixth #1 on the Mediabase Active Rock Chart and fourth #1 on the Billboard Mainstream Rock Chart. Press Here to watch the gripping video, illustrating a searing snapshot of a woman enduring an abusive husband as she plans to fight back, eventually ending up in jail but free of her abuser. Already being hailed their best album to date, Say Nothing, which debuted at #2 on the Billboard Alternative Albums chart and #3 on the Rock Albums Chart and was produced by Martin Terefe [Jason Mraz, Yungblud], finds Theory speaking up through timely lyrical commentary with the band’s finger on the pulse of the current climate and the issues that our society is grappling with today including domestic violence, racism, the divisiveness in American politics, and anxiety and depression, all threaded together with a message that’s both a cautionary warning and a hopeful wish for our collective future. With undeniable anthems, scorching songcraft, experimental vision, rock ‘n’ roll attitude, and clever pop ambition, Say Nothing is a continuation of their musical and thematic evolution, displaying the band’s powerful storytelling in full force and introducing fresh sounds and sonics. Theory’s 2017 album Wake Up Call featured their platinum single “Rx (Medicate),” which addressed the opioid epidemic and racked up more than 250 million streams, becoming their third #1 on the Billboard Hot Mainstream Rock Tracks chart and earning the band an iHeartRadio Music Award nomination for Rock Song of the Year. Over the course of nearly two decades, Theory’s impressive catalogue has earned them several platinum and gold singles, a platinum album and two Top 10 album debuts on the Billboard Top 20. Theory is: Tyler Connolly [lead vocals, guitar], Dave Brenner [guitar, backing vocals], Dean Back [bass], and Joey Dandeneau [drums, backing vocals].

Saint Asonia – named Loudwire’s Best New Artist of 2015 –sparked into life over four years ago when former Three Days Grace frontman Adam Gontier and Staind guitarist/founding member Mike Mushok decided to turn their joint ambition to make music that is “raw, real, and straight from our hearts” into a new band and a fully-fledged studio outing. The result was their acclaimed self-titled debut, released in 2015, which charted Top 10 in Canada and entered the Billboard U.S. Rock Albums chart at #2. The album was driven by the Top 10 radio tracks “Better Place” and “Let Me Live My Life,” as well as the high-concept video to the featured track “Fairy Tale.” Collectively responsible for 28 Top 10 U.S. Rock Radio hits, including 17 #1s — the demand was immediately there for Saint Asonia to take to the road. Following an inaugural main stage appearance at Rock on the Range in 2015, the band set off on U.S. amphitheater tours with Breaking Benjamin and Disturbed. Their latest record, 2019’s Flawed Design, hit #3 on the U.S. Hard Music Chart and spawned the Top 10 single “The Hunted” featuring Sully Erna. The hit song charted for 24 weeks, becoming one o the 20 most played current rock songs of the year at radio.

Full of autobiographical storytelling, guitar-driven anthems, drinking songs, and breakup ballads, Cory Marks’ upcoming release, Who I Am, is rooted in the influence of his hometown, where he grew up surrounded by the salt-of-the-earth residents of North Bay, Ontario. It was there where he began playing drums at 10 years old. Whenever he wasn’t banging along to songs by Deep Purple, Ozzy Osbourne and Rush, he was listening to his parents’ country records, developing a deep appreciation for outlaws like Waylon Jennings and Merle Haggard. Those two genres — classic country and amped-up rock — would eventually join forces in Marks’ own music, earning him a string of gigs with heavyweights like Toby Keith and Brantley Gilbert along the way.  Marks’ hot single, “Outlaws & Outsiders” (featuring Ivan Moody, Travis Tritt and Mick Mars), debuted at #1 on Billboard’s Top Rock, Hard Rock Digital Songs and Country Digital Song sales charts, Soundscan’s US and Canadian Rock Genre charts, iTunes Country Songs Charts in Canada and on the Amazon Outlaw & Progressive Country charts, #2 on Soundscan’s Canadian Country Genre chart, #3 on the Amazon Country New Releases chart and #5 on iTunes Country Songs charts in the UK and Australia. The video for the track has garnered over 10.1 Million views and the track itself has over 6.8 Million streams globally. 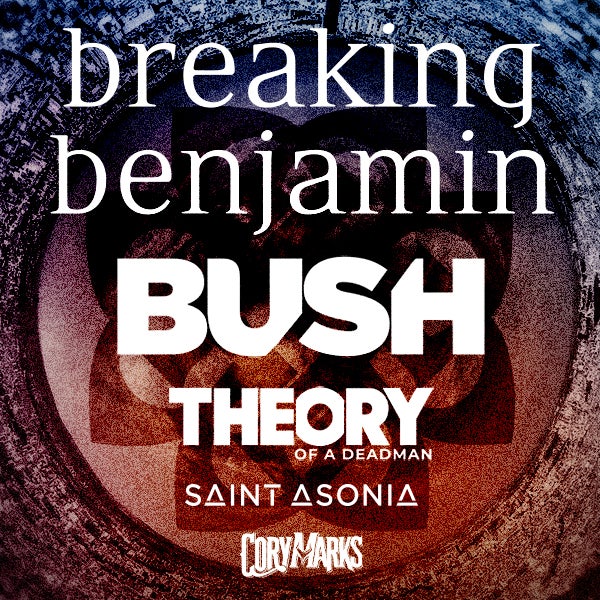