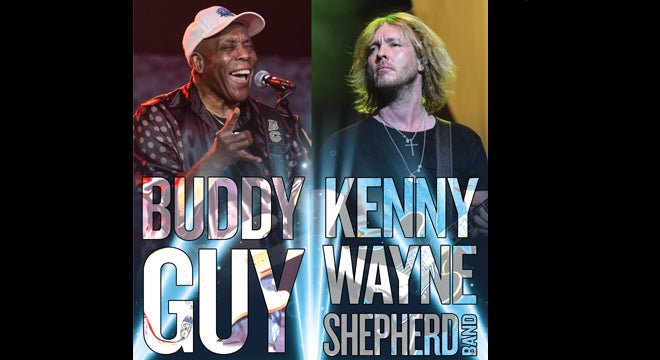 (DETROIT – January 14, 2019) – Multi-Grammy® Award winning blues icon Buddy Guy and renowned blues rock guitarist/songwriter, Kenny Wayne Shepherd will be hitting the road together on a co-headline US tour including a stop at Meadow Brook Amphitheatre on the campus of Oakland University on Thursday, June 13 at 7:30 p.m.

Tickets (starting at $20) go on sale Friday, January 18 at 10 a.m. and can be purchased at 313Presents.com, www.KennyWayneShepherd.com, www.BuddyGuy.net., Little Caesars Arena XFINITY box office and Ticketmaster.com. To charge tickets by phone, call (800) 745-3000. Similar to 313 Presents‘ other outdoor amphitheatres, and new to Meadow Brook Amphitheatre in 2019, the parking fee ($5) is now included in the ticket price.

The tour will begin on June 11 in Huber Heights, OH and will wind through Michigan, New Jersey,

New York, New Hampshire, Rhode Island and wrap up on June 23 in Washington, D.C. Buddy Guy and Kenny Wayne Shepherd will both be playing full sets at each performance.

Kenny Wayne Shepherd is over two decades into a recording career that began when he was just 16. He has sold millions of albums worldwide and, in addition to his five Grammy® nominations, he has won two Billboard Music Awards, a pair of Orville H. Gibson awards, the Blues Foundation’s Keeping The Blues Alive award and two Blues Music awards. He’s had eight #1 blues albums and a string of #1 mainstream rock singles. His latest release, Lay It On Down debuted at # 1 on the Billboard Blues Charts and remained there for 8 consecutive weeks.