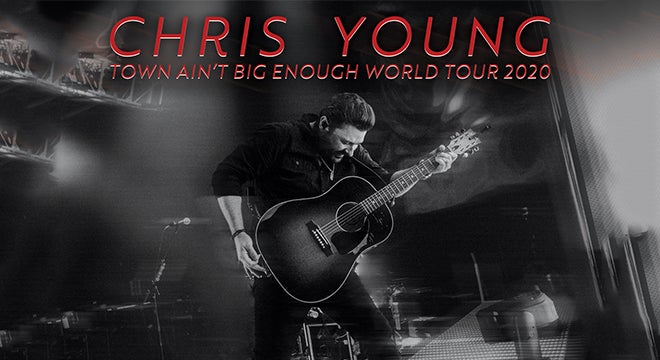 (DETROIT – January 14, 2020) –  Following a record year on the road in 2019 playing to over 400,000 fans on his headlining tour, multi-platinum entertainer Chris Young will take his arena/amphitheater “Town Ain’t Big Enough World Tour 2020” out beginning at DTE Energy Music Theatre on Thursday, May 28. Young will be joined by multi-platinum performer Scotty McCreery as direct support along with Payton Smith. In addition, Chris will highlight various Next From Nashville artists at his shows, offering the opportunity for up-and-coming acts to showcase their talents in front of a massive audience. Chris and The AMG Management will personally pick opening acts to play each week of the tour.

“Everyone has been asking about this year since the last tour ended, so I’m happy I finally get to tell everybody about these shows,” shared Chris. “The ‘Town Ain’t Big Enough’ tour is gonna be the biggest one yet!”

The ACM and Grammy® nominated vocalist celebrated several milestones in 2019, including over 2 Billion streams and a career topping 21,500 fans at Philadelphia’s BB&T Pavilion. After wrapping his headlining tour in November, Chris closed the decade with appearances on Macy’s Thanksgiving Day Parade, CMA Country Christmas and CMT Crossroads with Gavin DeGraw. He kicked off 2020 with the launch of his weekly podcast, “The Quad with Chris Young.” The new year will also bring a new album, including current single “Drowning,” named to Rolling Stone’s Best Country and Americana Songs of 2019, plus “Raised On Country” and “Town Ain’t Big Enough,” featuring Lauren Alaina.

About Chris Young:
Multi-platinum RCA Records Nashville entertainer Chris Young has accumulated an impressive list of accomplishments, including membership in the iconic Grand Ole Opry, 2 Billion on-demand streams, 12 Million singles sold, 11 career No. 1 singles, 17 R.I.A.A. Gold/Platinum/Multi-Platinum certified projects, 2 Grammy® nominations, 3 Country Music Association nominations and 4 Academy of Country Music nominations. As a prolific creator, Chris has given fans 7 studio albums in 14 years including Losing Sleep, his third project in less than two years. The title track is certified Platinum while “Hangin’ On” is his ninth No. 1 as a songwriter. Losing Sleep (2017) and I’m Comin’ Over (2015) debuted at No. 1 on Billboard’s Top Country Albums Chart with “I’m Comin’ Over” becoming Young’s first 2x Platinum single.

Named “one of his era’s finest traditionalists” by the Associated Press, Chris has quickly become an international ambassador for country music, performing to capacity crowds around the world including the sold-out C2C Festival in the UK. With a hit-packed set that highlights his eleven chart-toppers — including back-to-back No. 1s “Losing Sleep,” “Sober Saturday Night,” “Think Of You,” and “I’m Comin’ Over” — the Grammy and ACM nominated vocalist headlined the Raised On Country World Tour, playing to over 400,000 fans in 3 countries in 2019. His 2020 headlining tour will be announcing soon! He’ll take his “Town Ain’t Big Enough 2020 World Tour,” with special guests Scotty McCreery and Payton Smith, to Atlanta, Charlotte, Chicago, Cleveland, Dallas, Detroit, Indianapolis, Phoenix, Salt Lake City, Seattle, St. Louis and more, with additional dates announcing in the coming weeks.

About Scotty McCreery
Triple Tigers recording artist Scotty McCreery achieved new heights this year, earning two back-to-back No. 1 hits from his current album Seasons Change, which debuted at No. 1 on the Billboard Country Album chart: the RIAA Platinum-certified “Five More Minutes” and the RIAA Platinum-certified “This is It,” which stayed at the top of the charts for two weeks. His current single is “In Between.” He co-wrote all 11 songs on Seasons Change. All four of his albums have debuted at No. 1 on a Billboard Albums chart, with current combined sales surpassing 3 million copies. He’s earned five Platinum and one Gold singles; won the 10th season of “American Idol” in 2011; was named the ACM New Artist of the Year in 2011; won the CMT Music Award for Breakthrough Video of the Year (“The Trouble with Girls”) in 2012; American Country Awards for New Artist of the Year in 2011 and Breakthrough Artist of the Year in 2013; BMI Awards for writing One of the Top 50 Country Songs of the Year three times (in 2015 for “See You Tonight,” in 2018 for “Five More Minutes,” and in 2019 for “This is It”); a Carolina Beach Music Award for National Dance/Shag Song of the Year (“Barefootin’”) in 2018; and the NSAI Nashville Songwriter Award for One of the Top Ten Songs I Wish I’d Written (“Five More Minutes”) in 2018. The North Carolina native released his first book, Go Big or Go Home: The Journey Toward the Dream, in 2016. McCreery launched his recording career by making history in 2011 as both the first country artist and the youngest male artist of any genre to debut his first studio album, the Platinum-certified Clear as Day, at No. 1 on the all-genre Billboard Top 200 Albums chart. For more information and his current tour schedule, visit ScottyMcCreery.com.

About Payton Smith
Payton Smith is proof that working hard, taking risks and finding just a little luck really does pay off. When the Houma, Louisiana, native landed a slot on one of the smaller stages at CMA Fest in 2018, he decided to play as if he were headlining an arena, tearing through original songs all while delivering supercharged guitar solos. Big Machine Label Group President/CEO Scott Borchetta happened to be walking by that afternoon and shortly thereafter offered him a record deal on the Big Machine Records imprint. Payton had every reason to celebrate: since he first saw Keith Urban perform on the CMA Awards 14 years ago, he has dreamt of playing his own brand of Country music, one influenced by 90’s Country and Guitar Rock. The 19-year-old is every bit as much a fan of Pearl Jam and John Mayer as he is Clint Black, George Strait – certain that his peers have equally varied musical tastes. Honoring the genre’s traditions while moving the sound forward, Payton co-wrote a new collection of songs now available via his debut self-titled EP, highlighting his gifts as a vocalist, songwriter and nimble self-taught guitarist — he plays every guitar part on each track – just like his favorite slingers across the musical landscape. He worked with producer James Stroud and bonded with a fellow Louisiana native over their love of diving beats. His gift for melody, coupled with sharp but approachable lyricism and fluid guitar playing, sets up Payton to be the hottest young voice to change Nashville. As he made clear on that CMA Fest stage not long ago, he's not afraid to push the envelope or look at things from a different perspective. Payton has most recently shared the bill with Dwight Yoakam, Brad Paisley and performed at FGL Fest at Indianapolis Motor Speedway. For additional touring and updates, visit https://www.paytonsmithmusic.com/. 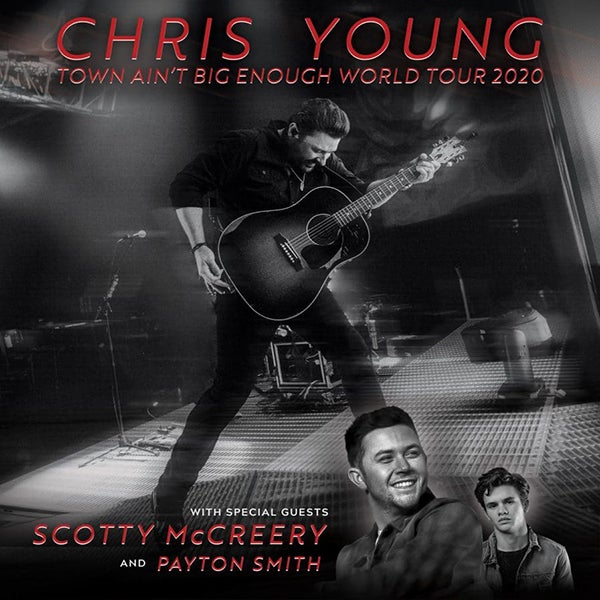