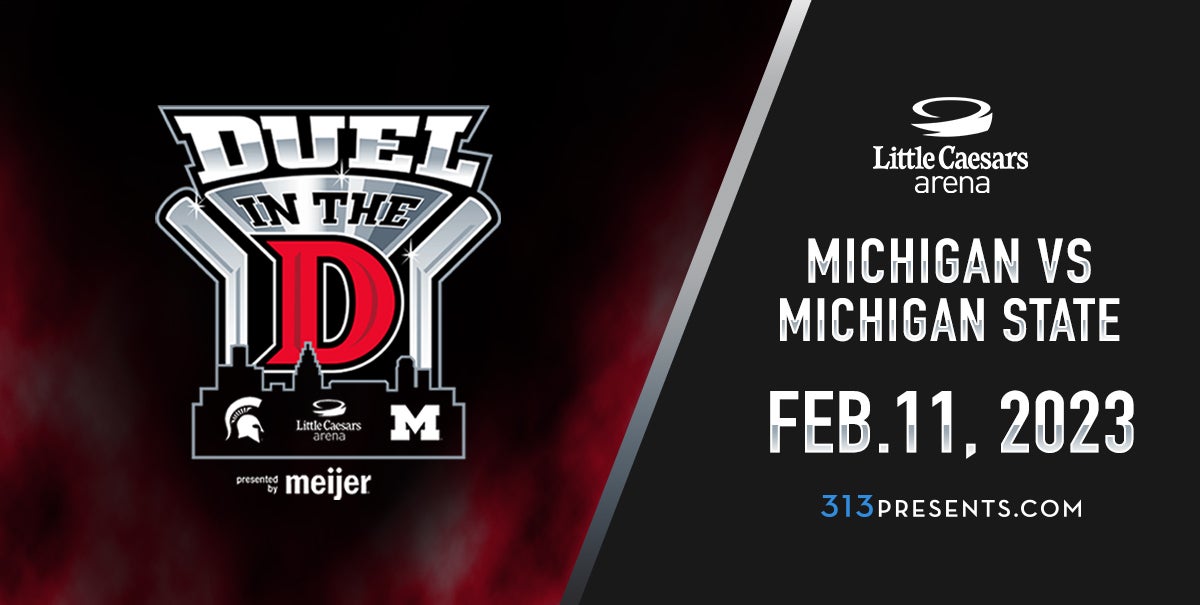 Home/College Hockey Returns To Little Caesars Arena With The Annual “Duel In The D,” Presented By Meijer, On Saturday, February 11

College Hockey Returns To Little Caesars Arena With The Annual “Duel In The D,” Presented By Meijer, On Saturday, February 11

The “Duel in the D” matchup features the most-played rivalry in college hockey. The game will mark the 342nd  all-time meeting between the historic programs, with Michigan currently holding a 177-138-24 edge in the all-time series.

Michigan, currently ranked No. 3 in the nation by the USA Today/USA Hockey Magazine poll, has claimed the “Iron D” Trophy in each of the last five matchups at Little Caesars Arena. The two teams will square off three times this season (Dec. 9 at MSU; Dec. 10 at UM; Feb. 10 at MSU) before their final regular season matchup in the “Duel in the D.”

Both Michigan and Michigan State feature new head coaches this season – as Adam Nightingale is at the helm of the Spartans and Brandon Naurato is serving as interim head coach of the Wolverines.

“We are really looking forward to returning to Little Caesars Arena,” Naurato said. “It’s an unparalleled experience for our players and for the fans to have this rivalry, Michigan vs. Michigan State, showcased on the big stage. The Detroit Red Wings and Little Caesars Arena staff are incredible, the fans are always passionate and we can’t wait for this next edition of the rivalry.”

“Bringing a Michigan State-Michigan game to Detroit is one of the great traditions of this rivalry,” Nightingale said. “It’s a privilege to be able to play in front of our fans in southeast Michigan and playing in an NHL building creates lasting memories for our players, alumni, and fans of all ages, too.  I have had the good fortune to experience this rivalry on both as a player and member of the staff, and I am looking forward to bringing our team down to Detroit to add another chapter to this rivalry in February. We are also incredibly grateful to Ilitch Sports + Entertainment for providing us this stage.”

Tickets for the “Duel in the D” are now on sale and can be purchased at 313Presents.com, Ticketmaster.com, the XFINITY Box Office at Little Caesars Arena or by calling the Red Wings Ticket Sales and Service office at 313-471-7575. Group discounts are available by calling 313 Presents Group Sales at 313-471-3099.

ABOUT THE “IRON D” TROPHY

The “Iron D” Trophy features a forged iron “D” at its center to symbolize the city of Detroit, while the skyline of Hockeytown wraps around the base, including an image of Little Caesars Arena placed at the center. A large cup rests atop the trophy and hockey sticks, a red glass puck, and the logos of Michigan and Michigan State line the sides of the trophy. The trophy was designed and built by Erik and Israel Nordin at their studio, the Detroit Design Center. 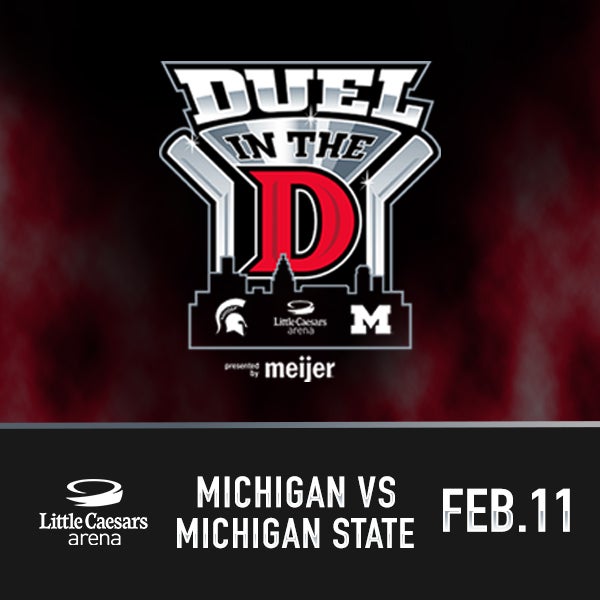 Duel In The D
Presented by Meijer

Duel In The D
Presented by Meijer
Get Tickets