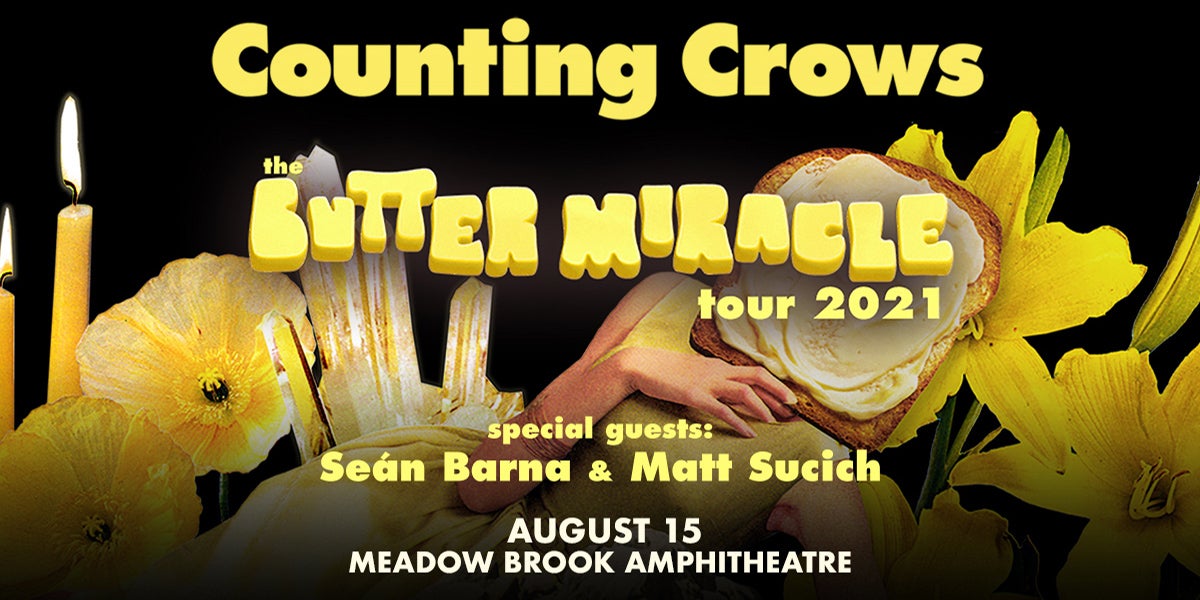 (DETROIT - June 7, 2021) —  Fresh off the release of their first album in nearly seven years, Butter Miracle, Suite One, the legendary Counting Crows today announce the dates for their highly anticipated return to the road with “The Butter Miracle Tour.” The 32-date run will be making stops at major cities across the US including a visit to Meadow Brook Amphitheatre on the campus of Oakland University on Sunday, August 15, 2021 at 7 p.m. Seán Barna and Matt Sucich will provide support.

Tickets (starting at $39.50 on the lawn) go on sale Friday, June 11 at 10 a.m. at 313Presents.com, LiveNation.com, Ticketmaster.com or The XFINITY Box Office at Little Caesars Arena. A Counting Crows artist presale and VIP package sales for the tour begin Tuesday, June 8 at 10 a.m. local time. VIP packages include exclusive merchandise and access to a special soundcheck experience. Visit CountingCrows.com for all the details.

Kicking off August 7 at the Hard Rock Atlantic City, the tour includes headlining the BeachLife Festival in Redondo Beach, CA before ending October 5 at the Hammerstein Ballroom and the Underwater Sunshine Festival in New York City. “The Butter Miracle Tour” announcement comes days after the release of Butter Miracle, Suite One, a four-track, nineteen-minute suite available now worldwide.

Earlier this year, frontman Adam Duritz teased both the album and tour via his popular online cooking show by making a recipe for…buttered toast.

Counting Crows have enchanted listeners worldwide for more than two decades with their intensely soulful and intricate take on timeless rock & roll. Exploding onto the music scene in 1993 with their multi-platinum breakout album, August and Everything After, the band has gone on to release seven studio albums, selling more than 20 million records worldwide, and is revered as one of the world's most pre-eminent live touring rock bands. In 2004, Counting Crows recorded the chart-topping “Accidently in Love” for the animated motion picture Shrek 2. The instant success of the track earned them an Academy Award nomination for “Best Original Song” at the 2005 Academy Awards, a Golden Globe nomination for “Best Original Song,” and a Grammy® Award nomination for “Best Song Written for a Motion Picture, Television or Other Visual Media.” Over the last 30 years, the masterful songwriting from frontman Adam Duritz put the band at No.8 on Billboard Magazine’s 2021 “Greatest Of All Time: Adult Alternative 25th Anniversary Chart.” On May 21, 2021, Counting Crows released Butter Miracle, Suite One to rave reviews. 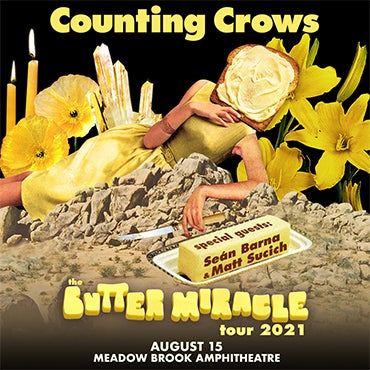