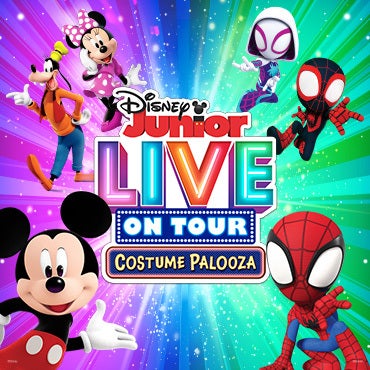 Disney Junior Tour Is Back

(DETROIT – May 16, 2022) – Dress up and join the party with “Disney Junior Live On Tour: Costume Palooza” coming to the Fox Theatre on Sunday, October 9 at 4 p.m. Comerica Bank is the exclusive presenting partner of the Fox Theatre.

Tickets (starting at $20) go on sale Friday, May 20 at 10 a.m. at 313Presents.com, Ticketmaster.com and the XFINITY Box Office at Little Caesars Arena. The pre-sale for the “Come Home The Kids Miss You Tour” will start Wednesday, May 11 at 10 a.m. local time. VIP packages will also be available for pre-show opportunities including premium seating, exclusive merchandise, and character experiences. Parents can go to DisneyJuniorTour.com to get more information, view tour dates and purchase tickets.

The show is brought to you by the creators of the two-time Pollstar nominated “Disney Junior Dance Party On Tour” which sold over 350,000 tickets. The live show is written and directed by Amy Tinkham and produced by Jonathan Shank of Terrapin Station Entertainment.

“We are going to blow the minds of Disney Junior fans with all the on-stage fun and new songs we have in store for them,” says Jonathan Shank, producer and CEO of Terrapin Station Entertainment. “We are so excited to be working with the Disney Junior team again on this premier preschool production bringing back all the beloved Disney characters, and now, for the first time, Marvel’s Spidey and his Amazing Friends,” says Shank.

“It is great to be able to bring the Disney Junior characters back on the road again, bigger and better, with incredible acrobatics, songs and dances. We know that families won’t want to miss the chance to see Marvel’s Spidey and his Amazing Friends perform, as well as Mickey, Minnie and their favorite Disney Junior pals.” says Jennifer Rogers Doyle, senior vice president, Networks Franchise Management, Integrated Planning, Licensing, Disney Media and Entertainment Distribution.