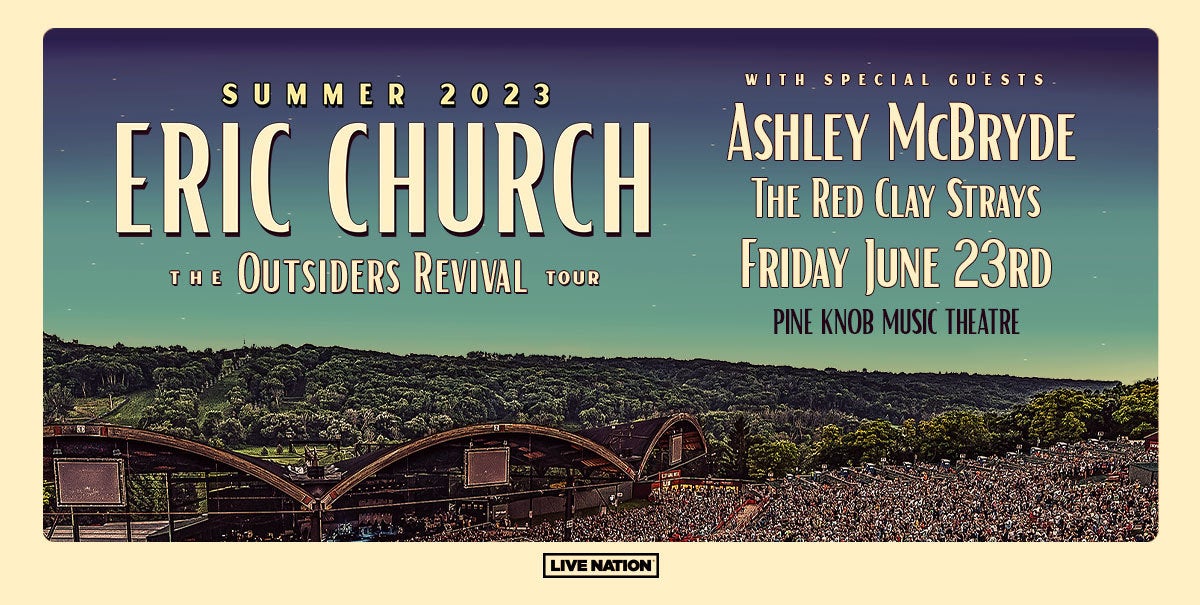 (DETROIT – January 11, 2023) – It’s a rite of passage for any music fan, seeing “The Chief” live in concert. Known for his marathon sets, the 2022 Billboard Music Awards’ Top Country Tour honoree Eric Church will bring his critically acclaimed live show to new audiences in new ways this year.  Headlining outdoor venues throughout the summer with “The Outsiders Revival Tour,” Church will take over the Pine Knob Music Theatre stage on Friday, June 23 at 7 p.m. Joining the man praised by Pollstar for “having already long established himself as one of the most successful touring country artists” for the local date is Ashley McBryde and The Red Clay Strays. Pine Knob Music Theatre is presented by Proud Partners United Wholesale Mortgage, Trinity Health and Ally.

“When I approach touring, I’m always inspired by a new experience, a new way to gather, to express ourselves sonically and visually. Whether it’s solo, in the round, double down; being able to bring a different perspective has always brought out our best creatively,” shared Church. “Well, we have never done an outdoor summer tour. Never headlined amphitheaters. Never brought a summer experience to your town that featured artists we want to share the summer with. Until now. See you in the season of sunshine with some fellow outsiders that shine brightest when the sun goes down.”

Kicking off June 22, the Live Nation produced tour takes the man celebrated by Forbes for “offering fans a unique experience each night while conjuring up the unpredictability that used to make concerts unforgettable” to 27 cities across the U.S. and Canada.

Eric Church’s most recent critically acclaimed and chart-topping project, his Heart & Soul triple album, is available everywhere now. Featuring the results of a marathon session during which he spent nearly a month writing and recording a song per day while sequestered in rural North Carolina, the trio features his latest Gold-certified No. 1 “Hell of a View” and recent Top 5 hit “Heart On Fire” as well as his latest single, “Doing Life With Me,” climbing the charts at Country radio now.

Just as unique as Church’s approach to recording and releasing music is his tenacity on the road. His latest outing, the 55-city The Gather Again Tour, offered fans an in-the-round show and earned the Billboard Music Award for Top Country Tour. Church also performed one-of-a-kind headlining stadium shows at Milwaukee’s American Family Field and Minneapolis’s U.S. Bank Stadium in 2022 and took the field at Tampa Bay’s Raymond James Stadium to perform the National Anthem with R&B star Jazmine Sullivan ahead of Super Bowl LV in 2021. During 2019’s Double Down Tour he played back-to-back nights of two unique shows in each market sans opening act, giving every city’s fans six-plus hours of his iconic music. The tour also featured a massive stop at Nissan Stadium in Nashville, where he broke the venue’s concert attendance record with more than 56,000 fans in attendance and became the first artist to sell out the venue with a solo lineup.

A seven-time ACM Award winner, four-time CMA Award winner (including the 2020 award for Entertainer of the Year) and 10-time GRAMMY nominee, Church has amassed a passionate fanbase around the globe known as the Church Choir as well as a critically acclaimed catalog of music. His previous project, the Gold-certified Desperate Man, earned a GRAMMY nomination for Best Country Album (his third nod in the category). Prior releases include the Platinum-certified Sinners Like Me (“How ’Bout You,” “Guys Like Me”), Carolina (“Smoke a Little Smoke,” “Love Your Love the Most”) and Mr. Misunderstood (“Record Year,” “Round Here Buzz”), the Double-Platinum certified The Outsiders (“Like a Wrecking Ball,” “Talladega”) and the 3x Platinum-certified Chief (“Springsteen,” “Drink In My Hand”), as well as 30 Gold, Platinum and multi-Platinum certified singles. 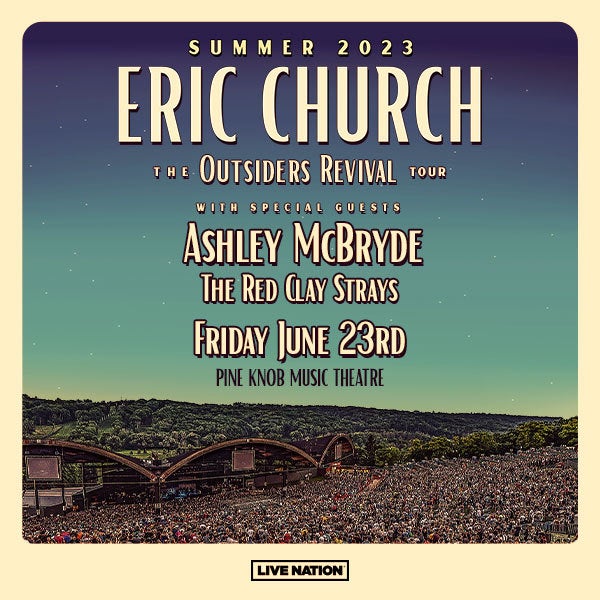