The attendance for the doubleheader was 20,645, which marked the largest crowd in the history of Little Caesars Arena.

Michigan’s Charles Matthews led five Wolverines’ players in double figures, scoring a game-high 20 points on 8-of-16 shooting. Jon Teske recorded his first-career start, and produced a double-double with 15 points and 10 rebounds. The Wolverines improved to 10-3 on the season. Detroit Mercy was led by former Wolverine Kameron Chatman, who scored 18 points and pulled down 13 rebounds.

All five of Michigan State’s starters scored in double figures, led by 19 points by Cassius Winston. Nick Ward recorded a double-double with 15 points and 15 rebounds. In a game that featured a combined 15 ties and lead changes, Michigan State improved to 10-1 on the season, while Oakland moved to 6-5 overall. The Golden Grizzlies were led by Kendrick Nunn, who poured in 32 points on 9-of-19 shooting, including a 9-of-10 effort from the free throw line.

The four participating coaches made the following comments about the Hitachi College Basketball Showcase at Little Caesars Arena, and bringing college basketball to The District Detroit:

Michigan head coach John Beilein
“When I took the tour, I said that this is the most fabulous building in the world right now for indoor sports. I’m proud to be part of it today; I want to be proud of it in the future.”

Detroit Mercy head coach Bacari Alexander
“Really, really excited that our Detroit Mercy team was lucky enough to play in this inaugural event here at Little Caesars Arena. One of the things that all four coaches recognize is the opportunity to bring college basketball to the city of Detroit.”

“My hat is off to (Olympia Entertainment President and CEO) Tom Wilson and his team and the job that they’ve done to bring all four institutions together. I couldn’t be more pleased, not only to be a participant, but we hope to continue this in years to come.”

Michigan State head coach Tom Izzo
“I got a chance to go for a jog this morning, and this place is coming. It’s really coming, and the people here were so good to us. I want to thank our fans for showing up for setting a record here. A lot of Michigan State people; I think that’s incredible.”

Oakland head coach Greg Kampe
“I am so happy that Oakland is a part of this deal. You had the Red Wings last night; you had these two college basketball games today; the Lions are playing right now and the Pistons play tomorrow. All right here. And the people thought enough of us to be a part of it.” 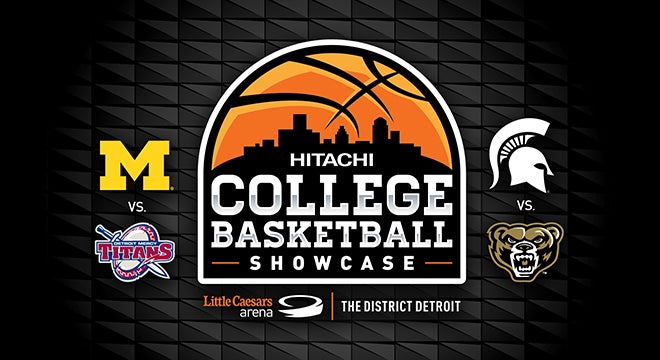