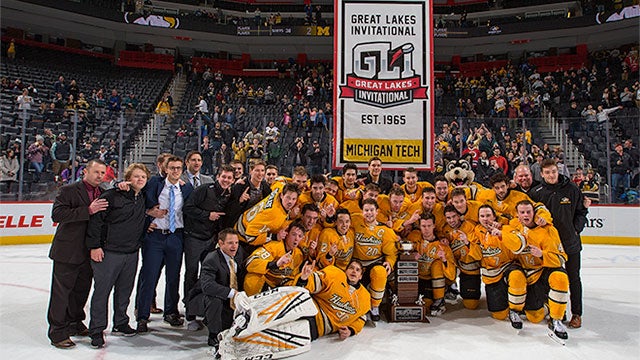 DETROIT (December 31, 2019) – Michigan Tech claimed its 11th MacInnes Cup with a 4-2 victory over Michigan on Tuesday in the Championship game of the 55th annual Great Lakes Invitational in front of 10,240 college hockey fans at Little Caesars Arena. Earlier in the day, Michigan State defeated Ferris State, 5-2, to claim third place in the annual holiday tournament.

Michigan Tech claimed their first MacInnes Cup since 2012 after advancing to the Championship game the last five-straight years. The fifth year was the charm for the Huskies, as freshman forward Logan Pietila recorded a hat trick en route to being named the GLI MVP. Michigan Tech netminder Matt Jurusik was stellar in net for the Huskies, making 35 saves in the victory, including 20 in the first period to keep the game scoreless going into the first intermission. Wolverines senior forward Nick Pastujov opened the scoring in the middle frame by tucking in a tight-angle goal at 5:48. Michigan Tech responded at 10:33 of the middle frame when Pietila finished off a cross-crease pass to knot the game at 1-1. But the Wolverines reclaimed the lead thanks to junior forward Jack Becker, who snuck a wrist shot past Jurusik to give Michigan a 2-1 lead. Pietila recorded his second goal of the game at 1:29 of the third period to tie the game once again. Pietila completed the hat trick with the eventual game-winning goal at 15:40 of third period to give the Huskies their first lead of the game. Sophomore forward Alec Broetzman tacked on an empty-net goal to seal the victory for Michigan Tech.

Michigan State jumped out to a three-goal lead in the first period and never looked back, defeating Ferris State, 5-2, in the first game of the day. The Spartans had goals from five different players, including three defensemen, in the victory. Michigan State sophomore defenseman Dennis Cesana led the way for the Spartans with a goal and two assists, while senior netminder John Lethemon made 22 saves. Michigan State came out of the gates flying, recording 17 shots and jumping out to a 3-0 lead by the first intermission. The Spartans kept the momentum rolling into the middle frame, as Cesana lit the lamp at 5:59 to give the Spartans a 4-0 lead. The two teams exchanged goals late in the second period to give the Spartans a 5-1 lead going into the final frame. Ferris State tallied the lone goal in the third period on the power play, but Michigan State held on to secure the third-place finish.

The most played rivalry in college hockey between Michigan and Michigan State continues at Little Caesars Arena when the two teams square off in the “Duel in the D” on Monday, Feb. 17 with the Iron D trophy on the line. Tickets for the “Duel in the D” start at $25 and can be purchased at 313Presents.com, Ticketmaster.com, the Little Caesars Arena XFINITY box office or by calling the Red Wings Ticket Sales and Service office at 313-471-7575.