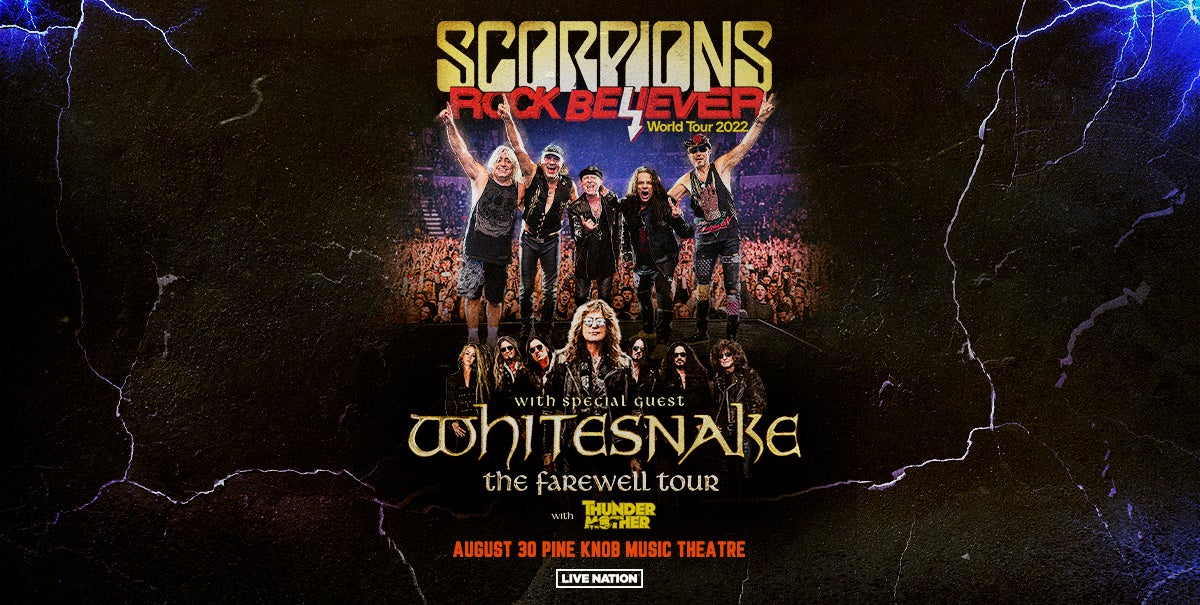 (DETROIT – May 9, 2022) – Scorpions, one of the most iconic and influential hard rock bands of all time will return to North America on the “Rock Believer World Tour” with special guests Whitesnake and Swedish band Thundermother on their Farewell tour. The tour stops at Pine Knob Music Theatre on Tuesday, August 30 at 6:45 p.m. Pine Knob Music Theatre is presented by Proud Partners United Wholesale Mortgage, Trinity Health and Ally.

Tickets (starting at $29.50 on the lawn) go on sale Friday, May 13 at 10 a.m. at 313Presents.com, LiveNation.com, Ticketmaster.com and the XFINITY Box Office at Little Caesars Arena. Scorpions Rock Zone fan club members will have exclusive, first access to tickets starting Tuesday, May 10 at 10 a.m. local time. For more information and to join the fan community visit The-Scorpions.com/RockZone.

Fresh off of their sold-out Sin City Nights Las Vegas residency, Scorpions will kick off a two month-long Live Nation produced run of dates on August 14 in Toronto with additional concerts in Los Angeles, Detroit, Chicago, Dallas, and Denver, amongst others.

“After the amazing start we’ve had with our residency in Las Vegas, it’s about time to come back for a real tour to rock the U.S. like a hurricane again.  We can’t wait to see all you Rock Believers out there!” - Klaus Meine

“Once Again It’s Time To Feel The Sting Of The Scorpions & The Bite Of The Whitesnake!!! Can’t Wait!!!.” - David Coverdale

Earlier this year in February 2022, Scorpions released their 19th studio album Rock Believer via Vertigo Records featuring the songs “Rock Believer,” Peacemaker” and “Shining of your Soul.” Stream & download the album across all digital platforms HERE.

With over 100 million records sold around the world, the band will play fan favorites from their incredible catalogue including “Wind Of Change,” “Still Loving You,” “Rock You Like A Hurricane,” “Send Me An Angel” and many more.

Founded in Hannover, West Germany in 1965, Scorpions were part of the first wave of metal in the 1970’s with their debut album, Lonesome Crow, released in 1972. The band rose to arena status with seminal releases Lovedrive, Virgin Killer and Animal Magnetism. In the `80s, Scorpions amassed a string of Billboard chart toppers from Love at First Sting and Blackout, including multiple Top 10 singles “Rock You Like a Hurricane” and “No One Like You,” as well a string of successful singles such as “Send Me an Angel,” “Still Loving You,” and “Wind of Change.”

The band was also ranked #46 on VH1’s Greatest Artists of Hard Rock and their hit “Rock You Like a Hurricane” also landed as #18 on VH1’s list of the 100 Greatest Hard Rock Songs.

Celebrated across the globe, the iconic rock act has sold more than 110 million albums worldwide and has received multiple honors including World Music Award winners, a postage stamp in Brazil, a Star on Hollywood Rock Walk, and Echo honors. Most recently, they were honored with the Lower Saxon State Award.

For the latest info visit: 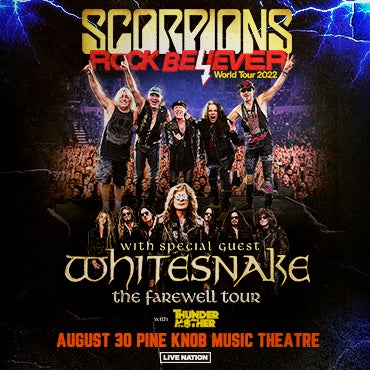