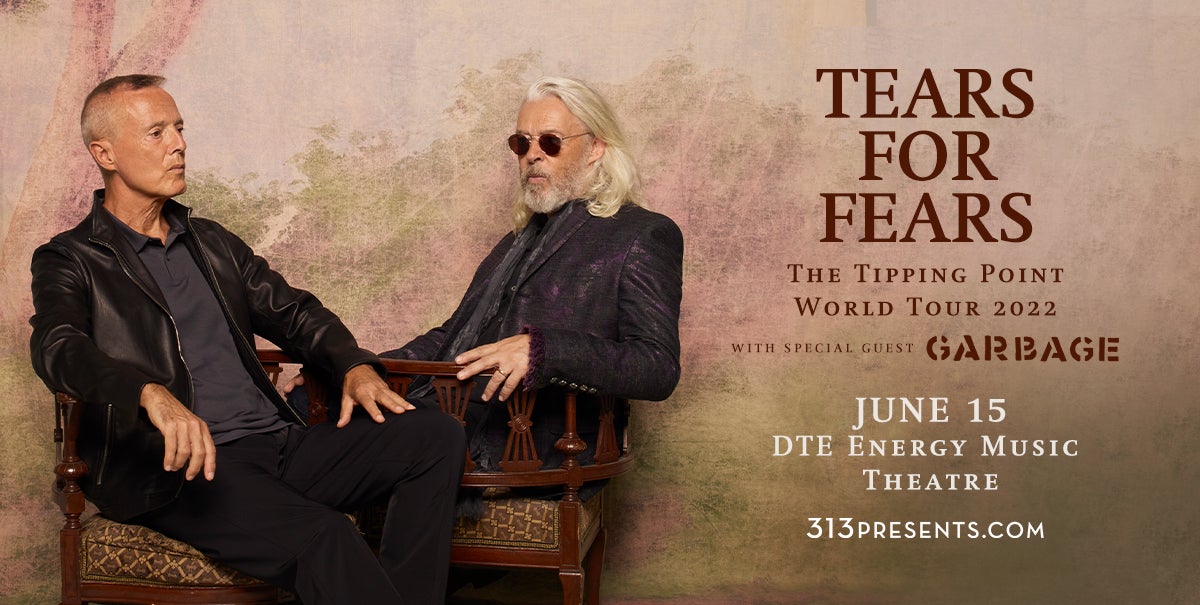 (DETROIT – November 12, 2021)– Iconic British duo, Tears For Fears, have announced the first leg of “The Tipping Point World Tour” in 2022, with Garbage as support. The tour will mark Tears For Fears first U.S. tour since 2017 and will see the band performing in over twenty cities across North America to include DTE Energy Music Theatre on Wednesday, June 15, 2022 at 7:30 p.m.

Tickets (starting at $29.50 on the lawn) go on sale Friday, November 19 at 10 a.m. at 313Presents.com, LiveNation.com, the XFINITY Box Office at Little Caesars Arena and Ticketmaster.com. Each ticket purchased for the Tears For Fears 2022 tour includes a digital download of the band’s new album, The Tipping Point. Also, on sale from the band’s official store as of today is an exclusive limited edition PINK vinyl version of The Tipping Point.

Citi is the official card of “The Tipping Point World Tour.” Citi cardmembers will have access to presale tickets beginning Tuesday, November 16 at 10 a.m. until Thursday, November 18 at 10 p.m. through the Citi Entertainment program. For complete presale details visit citientertainment.com.

“We couldn’t be more excited to start playing concerts again. We’ve missed seeing our friends on the road around the world and the energy of performing live,” said Curt Smith. “The Tipping Point has been a long time in the making and we are looking forward to playing our favorites from the new album as well as our classics from throughout the years,” shared Roland Orzabal.

Tears For Fears have just announced the forthcoming release of their first new studio album in nearly two decades, The Tipping Point. Arriving February 25, 2022, via Concord Records, The Tipping Point is a song cycle reflecting many of the personal and professional tipping points the pair -- AND THE WORLD -- have faced throughout the last several years. Pre-order the album here.

Alongside the announcement they’ve also released their first single and the title track, “The Tipping Point.” Written by Orzabal and guitarist, writer and producer Charlton Pettus and co-produced by the band, Sacha Skarbek, and Florian Reutter, the explosive yet intimate track is filled to the brim with emotion. Inspired by a personal tipping point in Orzabal’s own life, this song captures the grief of watching someone you love lose their long-standing battle with disease. The accompanying visual, directed by the famed Matt Mahurin (Joni Mitchell, U2, Metallica), depicts the subtle and poetic portrait of imbalance. Watch the video here.

Tears For Fears were one of the most iconic bands of the ‘80s, selling over 30 million albums worldwide with singles such as “Shout,” “Everybody Wants To Rule The World,” “Mad World,” “Sowing The Seeds Of Love,” and “Woman In Chains” acknowledged as classics.

The Tipping Point is the band’s first album since their reunion album Everybody Loves A Happy Ending in 2004. Since then, the band have toured extensively, including a sold-out UK arena tour and in 2017 released Rule The World, a best-of compilation that returned the band to upper reaches of the album charts once more. Earlier this month the band were honored with the Outstanding Song Collection Award at the 2021 Ivor Novello Awards.

The Tipping Point is the bold, beautiful and powerful sound of Tears For Fears finding themselves together, once again.

About Tears For Fears
Tears For Fears - Roland Orzabal (vocals, guitar, keyboards) and Curt Smith (vocals, bass, keyboards) formed in Bath, England 1981. With 30 million albums sold worldwide, performing to countless sold-out audience and winning various awards, the band represent an inimitable intersection of pop palatability, clever and cognisant lyricism, guitar bombast and new wave innovation. Their 1983 debut The Hurting yielded anthems such as “Mad World,” “Change” and “Pale Shelter,” reaching RIAA Gold status in the United States. 1985’s Songs from the Big Chair became a watershed moment for the group and music at large. Boasting the signature BRIT Award-winning “Everybody Wants to Rule the World,” “Shout,” “Head over Heels,” “Mothers Talk” and “I Believe (A Soulful Re-Recording),” it went quintuple-platinum and captured #1 on the Billboard Top 200. Slant dubbed it one of, “The Best Albums of the 1980s,” it was featured in the book 1001 Albums You Must Hear Before You Die, and Consequence of Sound awarded it a rare A+ rating in a 20-year retrospective.1989’s Seeds of Love proved to be Orzabal and Smith’s last collaboration together until Everybody Loves A Happy Ending in 2004, which rekindled the creative fire between them. The band engaged in a three-year touring whirlwind across North America, Japan, South Korea, Manila and South America beginning in 2010. 2013 saw them return with their first recorded music in a decade: a cover of Arcade Fire’s “Ready to Start.” The band returned once more in 2017 with the Rule The World best of collection which once more catapulted the band back to the upper echelon of the UK album charts. The duo’s DNA remains embedded within three generations of artists on both subtle and overt levels. Quietly casting a shadow over rock, hip-hop, electronic dance music, indie and beyond, Kanye West interpolated “Memories Fade” on “The Coldest Winter” from the seminal 808s & Heartbreak, The Weeknd infused “Pale Shelter” into Starboy’s “Secrets,” David Guetta sampled “Change” for “Always,” and Drake utilized “Ideas as Opiates” as the foundation for “Lust For Life,” while Ally Brooke Hernandez, Adam Lambert and Gary Jules recorded popular covers of “Mad World” and Disturbed took on “Shout,” and that’s only to name a few. Lorde cut a haunting cover of “Everybody Wants To Rule The World” for the Soundtrack of the blockbuster The Hunger Games – Catching Fire, which Tears For Fears gleefully would use as intro music live and thus bring everything full circle.

Garbage have been together as a band for over 25 years, with more than 17 million albums under their belt, multiple Grammy® nominations and a James Bond theme song for the film The World is Not Enough. Described as the “alternative to everything” by Pitchfork Magazine, Garbage set up their own, independently-run record label, STUNVOLUME through which they have been releasing their own records since 2012.

The band’s latest, ferocious new album No Gods No Masters, released in June of this year, is an ambitious, indignant record – overtly socio/ political in tone - touching on themes ranging from global unrest, encroaching climate change, the Black Lives Matter movement, sexism and misogyny. According to music critics all over the globe, they have made the perfect record to articulate these strange and chaotic times.

Enjoying a career of nearly 30 years and counting, Garbage remain one of the most influential bands in alternative rock and one of the most respected live bands of their generation. 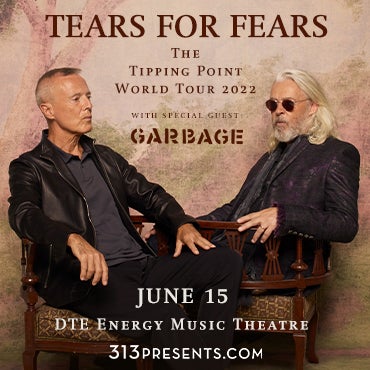 Tears for Fears
with special guest Garbage
Get Tickets