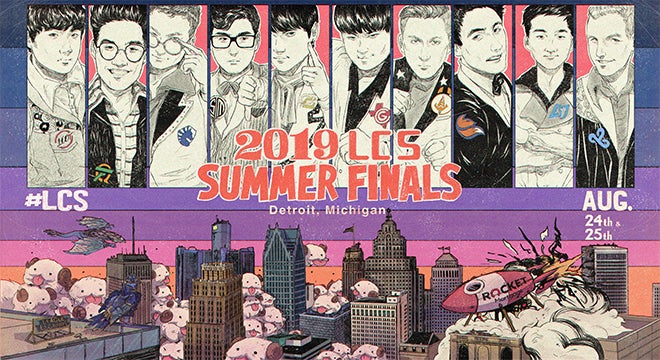 Detroit-based Rocket Mortgage, the first end-to-end completely customizable online and on-demand mortgage experience, has stepped up to bring one of the biggest esports events in North America to Detroit. Esports fans from across the country will descend upon Little Caesars Arena in The District Detroit on Saturday, August 24 and Sunday, August 25 to experience the 2019 League of Legends Championship Series (LCS) Summer Finals presented by Rocket Mortgage.

Fans attending the event this weekend, CLICK HERE for the most up-to-date information.

“We are doubling down on esports by supporting one of the biggest tournaments in the sport and bringing it to our hometown. The esports community strongly aligns with what we stand for as the nation’s largest FinTech lender– industry disruption and groundbreaking innovation,” said Jay Farner, CEO of Quicken Loans. “This is the latest in a long history of big innovative events to connect with passionate fans – from the Quicken Loans Carrier Classic and the Billion Dollar Bracket to the Rocket Mortgage Homestretch Sweepstakes – so bringing one of the biggest esports events to Detroit is the exciting next step.”

Riot Games is the publisher of League of Legends (LoL) and the operator of the League Championship Series (LCS), North America’s premier esports league, with 13 professional leagues in regions around the world. The top team at Detroit’s LCS Summer Finals will not only take home the winning title and a $100,000 purse, they will also qualify for a spot to represent North America at the 2019 League of Legends World Championship being held in Europe later this year.

In addition to bringing the 2019 League of Legends Championship Series (LCS) Summer Finals presented by Rocket Mortgage to Detroit, Rocket Mortgage is also an active sponsor of 100 Thieves and their LoL team, which will compete for a slot in the tournament.

“We’re proud to partner with Rocket Mortgage as they become the first-ever presenting sponsor of the LCS Summer Finals,” said Chris “Chopper” Hopper, Head of Esports for North America at Riot Games. “We always strive to bring League of Legends to new locations around the region and are excited to offer one of the top esports events in North America to the passionate fans in Detroit for the first time.”

This year’s Summer Finals in Detroit comes on the heels of an action packed LCS Spring Final in St. Louis, which featured a sold-out crowd and an even greater audience online. More than 600,000 fans of the LCS tuned in at the peak of the broadcast, generating over 2.4 million total hours of viewership. The recent League of Legends World Championship, which attracted a global audience of nearly 100 million unique viewers for the final match, eclipsing any major North American sporting event.

“After the amazing activations that Rocket Mortgage has unveiled over the last year and a half as a partner of 100 Thieves, we are looking forward to an amazing show in Detroit, and a one-of-a-kind experience for our fans at the event,” said Chris Greeley, LCS Commissioner.

Detroit is home to a growing list of tech companies that are attracting like-minded innovation-focused young professionals to the city’s urban core. The list of companies – which is growing by the day – includes Microsoft, LinkedIn, Amazon, WeWork, Google, Pinterest, Snapchat, Twitter, Uber and StockX – along with Quicken Loans/Rocket Mortgage.