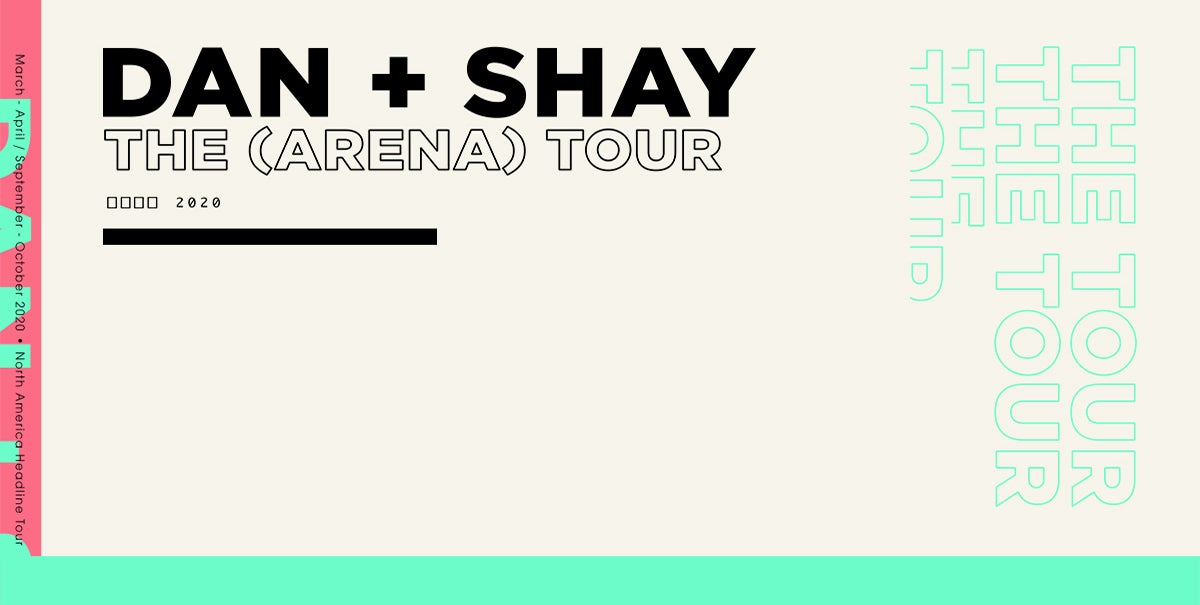 In light of the ongoing COVID-19 pandemic, the Dan + Shay show at Little Caesars Arena has been postponed.

A new show date is to be determined. Patrons are advised to hold onto their tickets until a new date is announced as they will be honored for the rescheduled date. For more information visit: www.aegpresents.com.

Refunds will be available at point of purchase within 30 days of the new show date being announced.

Solidifying their superstar status with yet another career milestone, Grammy®-winning duo Dan + Shay will perform for their first ever headlining arena trek, Dan + Shay The (Arena) Tour, presented by AEG Presents.

Dan + Shay shared the touring announcement just days after unveiling a brand new collaboration with one of the world’s best-selling pop icons, Justin Bieber, as their single “10,000 Hours” (listen here). The duo’s Dan Smyers and Shay Mooney co-wrote the song with Bieber alongside Jessie Jo Dillon, Jordan Reynolds and Jason “Poo Bear” Boyd. The undeniably catchy track was also produced by Smyers and promises a lifetime of learning and loving as his and Mooney’s flawless harmonies trade verses with Bieber’s smooth vocal. Watch the song’s music video here.

Fans can expect to hear the duo’s growing catalog of hits from their most recent album Dan + Shay, which held strong in the Top 5 on Billboard’s Top Country Albums chart earning over two billion on-demand streams globally to date. The record-breaking project produced three back-to-back chart-topping singles – the 3x Platinum multi-week No. 1 “Tequila,” 2x Platinum four-week No. 1 “Speechless” and the Gold-certified “All To Myself.”

In addition to a string of No. 1 hits, the album rewarded the duo with their first-ever Grammy® award for Best Country Duo/Group Performance (“Tequila”), with their performance on the live broadcast becoming the most Shazamed song of the night. They were the-most awarded artist at last year’s ACM Awards, taking home three awards for Best Duo, Song and Single (“Tequila”), with Smyers earning an additional two for his work as a songwriter and producer. Dan + Shay also added a Billboard Music award for Top Country Duo/Group to their shelves, and took home two surfboards at the Teen Choice Awards for Choice Country Artist and Choice Country Song (“Speechless”) after sweeping the country categories. Among the most-nominated artists at last year’s CMA Awards, Dan + Shay were up for Duo, Album and Single of the Year for “Speechless,” with Smyers receiving an additional nomination for Song of the Year as a co-writer alongside Nicolle Galyon and Jordan Reynolds on “Tequila” for the second year. Last year, CMT also awarded them the Duo Video of the Year trophy for “Speechless” and announced their inclusion as one of the top country superstars of 2019 to be celebrated at their 10th Annual CMT Artists of the Year special.

Dan + Shay continue their rapid rise and are taking the music world by storm.  The last twelve months have seen Grammy®, Billboard, ACM, CMT, and Teen Choice Award wins – most recently snagging several CMA Awards nominations, the accumulation of over two billion on-demand career streams, several mega-hit, chart-topping songs, and more.  The pair have already sold out headlining US & UK tours in 2019, where they performed from their ever-expanding array of hits, including their most recent chart-topper, “All To Myself,” their 2x-Platinum, multi-week No. 1 single “Speechless”, and the most-streamed song released in 2018, multi-Platinum, multi-week No.1 global smash, “Tequila.”  All three are featured on Dan + Shay, which has sold more than one million album equivalents and debuted at No. 1 on Billboard’s Top Country Albums chart the same week “Tequila” reached No.1 on the Country Airplay chart, marking the first time since 2009 that a duo or group has topped both charts simultaneously.  Dan + Shay made SoundScan recorded history as the first new country duo to debut at No. 1 on Billboard’s Country Albums Chart with their Gold-certified first album, Where It All Began.  Their catalogue comprises three albums, including Where It All Began, Obsessed, and Dan + Shay, six Platinum singles, including the duo’s debut “19 You + Me,” and their six No. 1 hits: “Tequila,” “Speechless,” “All To Myself,” “Nothin’ Like You,” “From The Ground Up” and “How Not To.”