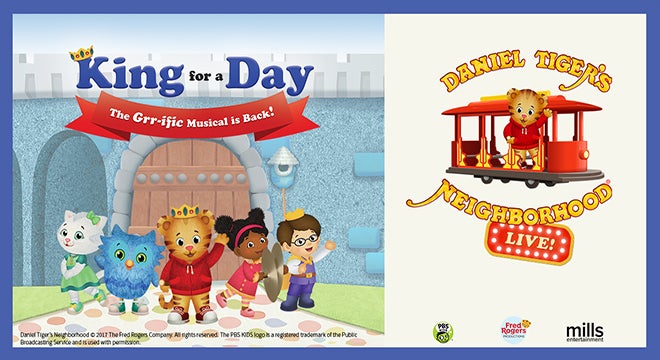 The grr-ific musical for little tigers and grown-ups alike is back! Young fans and their families will get to experience Daniel Tiger’s Neighborhood, the hit Emmy-nominated PBS KIDS series, in an all new way when the can’t-miss live stage show, Daniel Tiger’s Neighborhood LIVE! King For A Day, comes to the Fox Theatre for two performances on Saturday, April 27 at 2 p.m. and 5:30 p.m.

In Daniel Tiger’s Neighborhood LIVE! King For a Day, audiences “ride along” on an exciting adventure as Daniel learns what it takes to be king. Produced by Fred Rogers Productions and Mills Entertainment, the engaging, full-scale musical production is filled with magical moments and sing-along fun, and features favorite characters from the Neighborhood of Make-Believe, It’s a “royally” good time for the whole family!

The first TV series inspired by the iconic, award-winning Mister Rogers’ Neighborhood, Daniel Tiger’s Neighborhood stars 4-year-old Daniel Tiger, who invites young viewers into his world, giving them a kid’s-eye view of his life. One of the key ingredients that makes the series a standout is its groundbreaking use of catchy musical strategies, grounded in Fred Rogers’ social-emotional curriculum, that reinforce each theme and that preschoolers and parents can sing – and use together – in their daily lives.

Tickets can be purchased at the Fox Theatre and Little Caesars Arena XFINITY box offices and Ticketmaster.com. A limited quantity of VIP packages are also available.