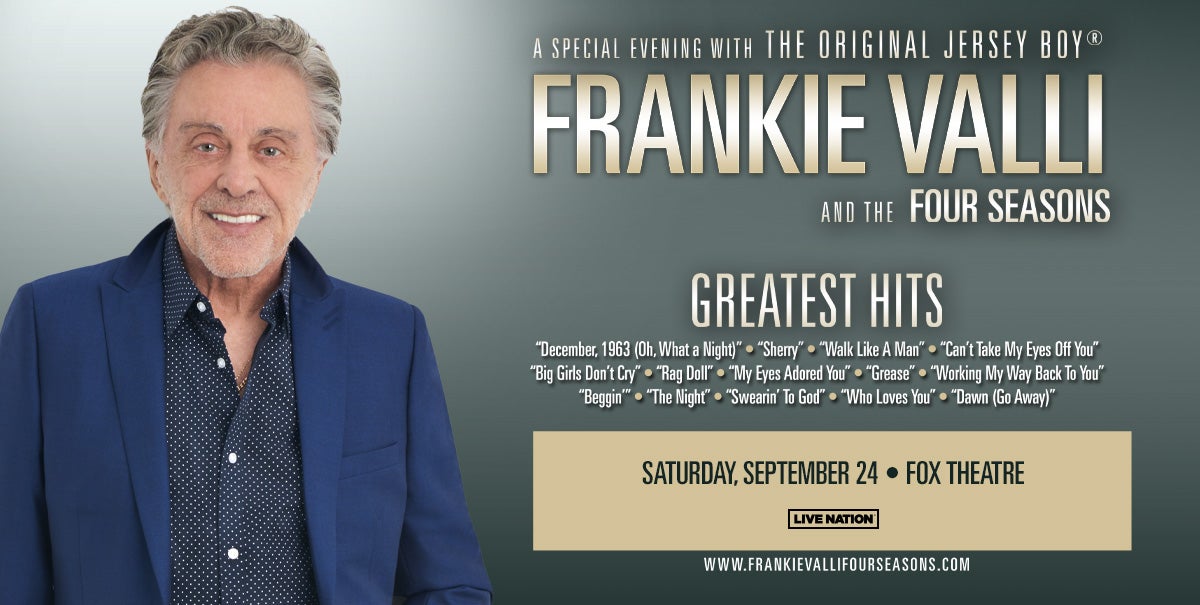 Tickets for the previously schedule shows will be honored at the new date.

The original Jersey boy himself, Frankie Valli is a true American legend. His incredible career with The Four Seasons, as well as his solo success, has spawned countless hit singles. With unforgettable tunes like “Sherry,” “Walk Like A Man,” “Big Girls Don’t Cry,” “Rag Doll,” “December ‘63 - Oh What A Night,” “Can’t Take My Eyes Off of You,” and of course, “Grease.” His songs have been omnipresent in other iconic movies such as The Deer Hunter, Dirty Dancing, Mrs. Doubtfire, Conspiracy Theory and The Wanderers. As many as 200 artists have done cover versions of Frankie’s “Can’t Take My Eyes Off You,” from Nancy Wilson’s jazz treatment to Lauryn Hill’s hip-hop makeover. Frankie Valli & The Four Seasons have sold over 175 million records worldwide.

Valli’s long-lasting career led to the overwhelming success of the Broadway musical Jersey Boys, which chronicled Frankie Valli & The Four Seasons’ incredible career and all of their greatest hits. Jersey Boys opened in New York in November 2005, ending its 11-year run January 15, 2017, after 4,642 performances at the August Wilson Theatre. It won four Tony Awards including Best Musical (2006), and is the 12th longest running show in Broadway history.

In 2014, Valli’s life story was featured in the film adaptation of Jersey Boys, directed by Academy Award winning director Clint Eastwood. Valli also returned to acting in Rob Reiner’s romantic comedy, And So It Goes (2014), starring Michael Douglas and Diane Keaton. His mega hit “Big Girls Don’t Cry” was inducted into the Grammy® Hall of Fame 2015.