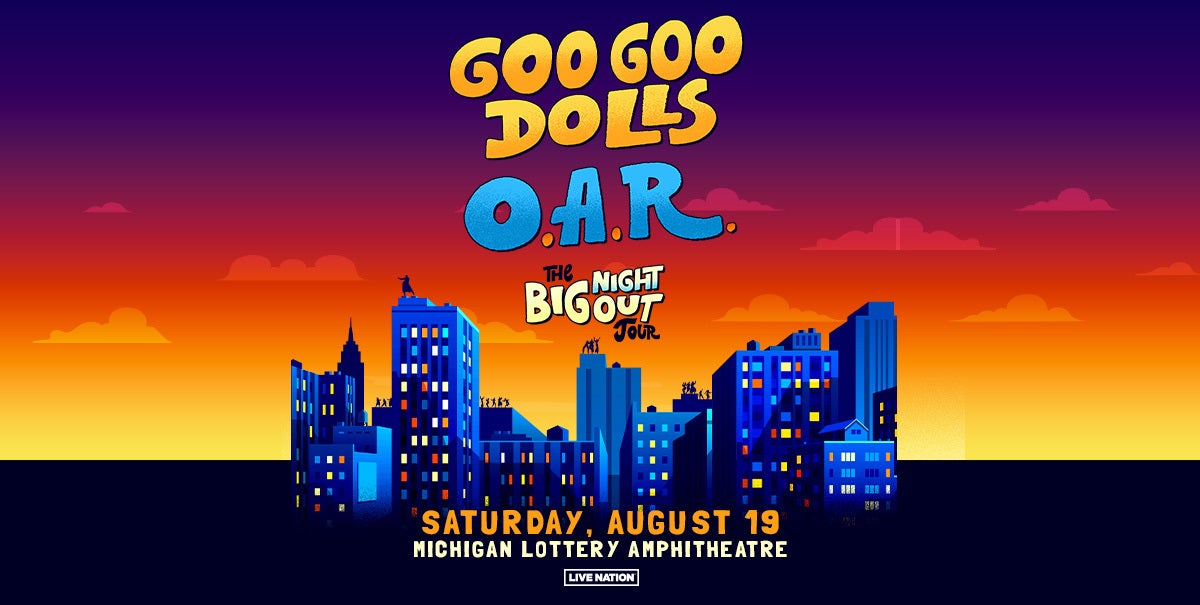 Multi-platinum, four-time Grammy®-nominated rock band Goo Goo Dolls have revealed the details for their “The Big Night Out Tour” with O.A.R. The massive summer 2023 tour will visit Michigan Lottery Amphitheatre on Saturday, August 19, 2023 at 7 p.m.

Goo Goo Dolls will be partnering with Joe Torre Safe At Home for the tour, a nonprofit founded in 2002 by Ali and Joe Torre to provide healing and education services to youth who have been traumatized by exposure to violence including domestic violence, child abuse, teen dating abuse, and sexual assault to help break the cycle of violence.

On the upcoming tour, John Rzeznik shared, “I’m so proud to finally be able to announce our summer tour with a great band and our friends O.A.R. It’s going to be an amazing night of great music for everyone so BE THERE!!!”

O.A.R.’s Marc Roberge added, "After working on separate albums in the same studio all last year, John and I realized pretty quickly how much fun we'd have on tour together.  We're all band guys, love being musicians, and started planning a special night that all our fans would enjoy.”

Goo Goo Dolls wrapped up a major North American headline tour in support of their latest studio album Chaos in Bloom. It marked the band’s first headline tour since 2019 and saw them perform a career-encompassing set that featured multiple songs from Chaos in Bloom along with other hits from their complete discography including the indelible hit “Iris,” which eclipsed 1 billion streams on Spotify earlier this year.

The first album of their career to be produced by frontman John Rzeznik, Chaos in Bloom finds the band continuing to evolve just as they have for nearly four decades together. Consisting of 10 tracks including singles “Yeah, I Like You” and “You Are The Answer”, Chaos in Bloom is an album of biting sarcasm, stadium-ready choruses, and the type of spear-sharp songwriting that’s led them to becoming one of the most influential alternative rock groups of all time.

Currently, frontman John Rzeznik is gearing up to take the iHeartRadio Theater stage in Los Angeles on December 13 for a special acoustic performance. The show will stream at 7pm PT/10pm ET on YouTube.com/iHeartRadio and broadcasted on iHeartMedia’s Hot AC stations.