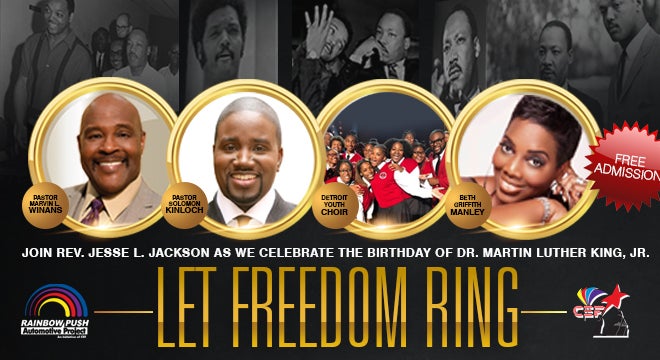 The recipients include UAW President Rory Gamble, first African American to lead the labor union, and Maureen Taylor, chair of the Michigan Welfare Rights Organization who for decades has spiritedly championed worthy causes for low-income families.

The Detroit News editor and publisher, Jonathan Wolman, who will be posthumously honored for not only promoting fair and objective reporting of the news but also giving important support to the Fannie Lou Hamer's voting rights campaign in Mississippi that got thousands of African Americans registered to vote. And, Congressman John Conyers, Jr. will receive posthumously the inaugural Legacy Award for his painstakingly efforts and persistence that ultimately led to the Dr. Martin Luther King Jr. National Holiday.

Dr. King first delivered his famous I Have A Dream speech on June 28, 1963 in Detroit, following the Walk to Freedom mass march that involved over 125,000 participants.  In the spirit of Dr. King, Pastor Solomon Kinloch of Triumph Church will deliver a powerful message at this year's national holiday.

But for the assassin's bullets that cut short his amazing life on April 4, 1968 in Memphis Tennessee, Dr. King would have turned 91 years old on January 15. Yet, his compelling words and courageous acts of brotherhood and nonviolence have continued to inspire and shape the worthy course of freedom and social and economic justice around the world.

"In honoring the legacy of Dr. King, we are reminding ourselves of the blazing imperative to keep hope alive, and to keep firing the high maintenance engines of freedom, fairness and dignity for all," noted Rev. Jackson who will lead the January 20th celebration.

"So, Detroit has always had a special place in our collective long walk to equity and justice," added Jackson, "in spite of his death, his truths are still marching on."

Dr. King, a Baptist preacher and Nobel peace laureate who led the civil rights movement in America from the 1955 Bus Boycott in Montgomery until his Memphis assassination in 1968, is the only non-American president to have a national holiday memorializing him.

Tickets to this event are free and only available online at Ticketmaster.com. There will be no box office sales for this event. All tickets are MOBILE ONLY with no PDF’s permitted.