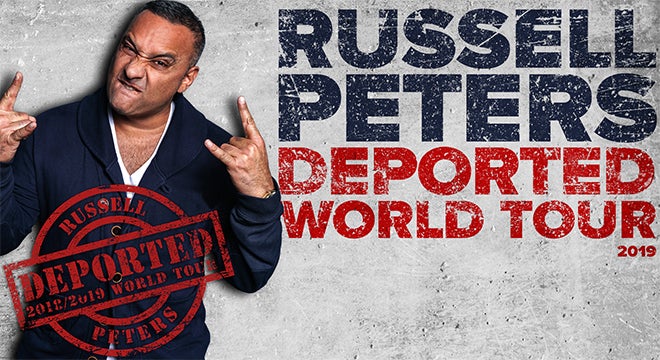 313 Presents and Outback Presents are thrilled to announce global comedy superstar Russell Peters at the Fox Theatre in The District Detroit on Saturday, September 14 at 8 p.m. The Emmy®, Gemini® and Peabody® award-winning comic will bring his unique and sometimes controversial brand of humor to the stage in an all new “Deported World Tour” featuring plenty of Russell’s signature audience interactions.

Peters can also be seen in the films, The Clapper with Ed Helms, Amanda Seyfried and Tracy Morgan as well as Supercon with Ryan Kwanten and John Malkovich, and Adventures in Public School with Judy Greer.

“The Deported World Tour” kicked off in Australia and New Zealand in February 2018 and has already travelled to over 29 cities in 20 countries and been seen by over 100,00 fans worldwide. The tour will continue well into 2019 and Peters will then take an extended break from live touring to focus on other ventures and spend more time at home with his daughter.

Listed on the Forbes List as one of the top ten Highest Earning Comics in the U.S. since 2009, Peters has spent the last 29 years building a career to become one of the biggest comics in the world. Thanks to YouTube and his global following, Peters has sold-out arenas from Madison Square Garden to the Sydney Opera House. Peters has also performed for the troops in Afghanistan, Iraq and on the USS Eisenhower and the HMCS Winnipeg, and appeared on The Tonight Show with Jay Leno, Lopez Tonight, Jimmy Kimmel Live, The Late Late Show with Craig Ferguson and on HBO, CNN, MTV, BBC, Showtime and Comedy Central.  Peters 2010 memoir, Call Me Russell, was a Globe and Mail number one bestseller in Canada.

Peters is an active philanthropist having donated more than a million dollars over the past several years to various charities from the Brampton Civic Hospital, Gilda’s Club, the MS Society of Canada and a scholarship at his old high-school; The Russell Peters North Peel Scholarship, which sends a deserving student to college. The scholarship is now in its ninth year.