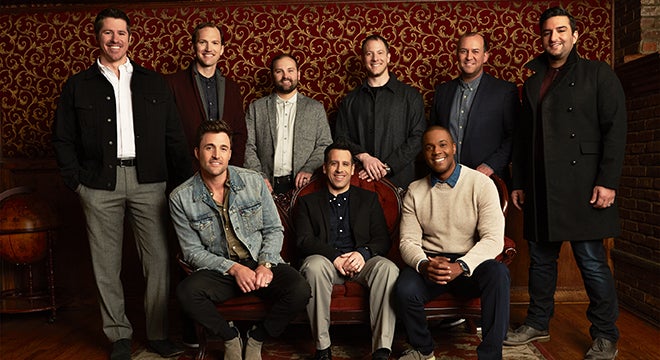 Atlantic Records recording group Straight No Chaser has announced early details of their upcoming “One Shot Tour” with dates in the US and Europe including a stop at the Fox Theatre on Wednesday, December 19 at 8 p.m.

The European leg kicks off on September 12th at the House of Culture in Helsinki, Finland with dates through the month wrapping on September 25th at Vicar Street in Dublin, Ireland. The North American leg of the “One Shot Tour” will begin on October 26th at the Mystic Lake Showroom in Prior Lake, MN and continues through the holiday season, wrapping up on December 31st at McCaw Hall in Seattle, WA.

The upcoming tour coincides with the 10th Anniversary of Straight No Chaser signing with Atlantic Records and the release of their debut album, Holiday Spirits after a video of the group performing “12 Days of Christmas” went viral on YouTube and became the most viewed video of 2007. Upon the release of Holiday Spirits in 2008, The New York Times predicted “this may be the year’s most unlikely major label story.” Now, ten years later with six full length albums and four EPs under their belt, the group will hit the road to celebrate and invite fans to join them on the “One Shot Tour.”

Additionally, Straight No Chaser is currently working on new music, with more details to come over the next few months. In the meantime, the world famous a cappella group will hit the road this summer to bring “An Evening with Straight No Chaser” to select cities with dates throughout July. The summer run follows the group’s recently wrapped “The Speakeasy Tour” in support of last summer’s Six Pack: Volume 3 EP that saw Straight No Chaser crack open a number of contemporary pop hits and rock classics, highlighted by “Sweet Dreams/HandClap” – their one-of-a-kind mash-up of Eurythmics’ “Sweet Dreams (Are Made Of This)” and Fitz and the Tantrums’ “HandClap” – as well their show-stopping “Beyoncé Medley.”

Tickets can be purchased at the Little Caesars Arena XFINITY box office and Ticketmaster.com. To charge tickets by phone, call (800) 745-3000. Pre-sale tickets will be available to members of Straight No Chaser’s official fan club beginning Tuesday, May 8. For complete ticket information and other news, please see www.sncmusic.com/tour.