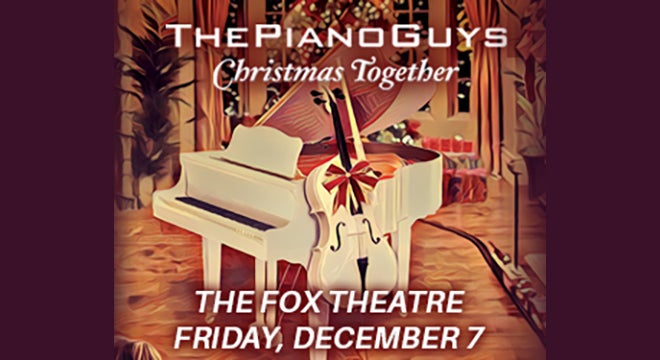 The Piano Guys, who created an Internet phenomenon with their original blend of classical music with pop will return to showcase their talents live for a concert at the Fox Theatre on Friday, December 7 at 7:30 p.m. as part of their “Christmas Together” tour.

The Piano Guys consist of Jon Schmidt on piano, and one other instrumentalist, Steven Sharp Nelson, on cello. Yet the other two, producer/videographer Paul Anderson, and music producer/songwriter Al van der Beek, are equally significant members of the group.

The spectacular videos, which have so far netted over 1.2 billion YouTube views (their YouTube channel also has over 5.4 million subscribers), are essentially divined by Anderson. "Jon had built up a fan base for 20 years, and we used that as a springboard for getting exposure," Anderson notes, "but it's all about the merits of the videos, and share-ability. People see them and then share them with their friends on Facebook, and before you know it, they can take off."

And sure enough, The Piano Guys have over 1.6 million Facebook fans who have shared videos like "Michael Meets Mozart," which features over 100 tracks of cello textures, including a deep bass drum sound created by tapping on the cello body; a shaker sound made by Nelson rubbing rosin on his bow; and a record-scratch noise caused by his scraping a quarter on the strings. "Michael Meets Mozart" is on The Piano Guys debut CD, as is "Cello Wars," the ambitious video which resulted from a six-month production required to realize its Star Wars-inspired light saber/cello bow concept, since rewarded by over 37 million YouTube views.

"We try to put a 'wow factor' in every video," says Anderson, promising that future videos for The Piano Guys tracks will likewise factor in plenty of wow. This certainly is true for "Peponi (Paradise)," the Guys' African spin on Coldplay's "Paradise," for which the group, hours after coming up with the concept, helicoptered a grand piano onto the edge of a 1,000-foot cliff, where stellar African guest vocalist Alex Boyé sang the translated words. Same with "Code Name Vivaldi,” which blends The Bourne Identity soundtrack riff with a similarly intense Vivaldi cello concerto in a breathless video culminating with Schmidt and Nelson, who was originally swayed into classical music by the Vivaldi piece, performing on a flatcar on a high-speed train. “Beethoven's 5 Secrets” merits special mention. The piece itself employs five separate melodies from the four movements of Beethoven's 5th Symphony, in conjunction with One Republic’s “Secrets.”

“Lots of parents are using our music to show their kids how fun classical music can be and motivate them to learn instruments,” says Schmidt. The Piano Guys’ cover song mash-ups, adds Nelson, have become “a great way to introduce ourselves and make an instant connection with our audience as a classic spin on new stuff - and a new spin on classic stuff.”

With van der Beek’s studio prowess together with the inventive cinematography of Anderson, Schmidt and Nelson have forged a fresh approach to the growing classical crossover fusion of classical and pop music that in their case has connected quietly but emotionally with a massive audience.

“We’re all spiritual guys, and the only way to properly explain it is not to take credit!” says Nelson. “It really seems meant to be.”

Tickets can be purchased at the Fox Theatre Box Office and the Little Caesars Arena XFINITY Box Office (both without service charge) and Ticketmaster.com. To purchase tickets by phone, call 800-745-3000.