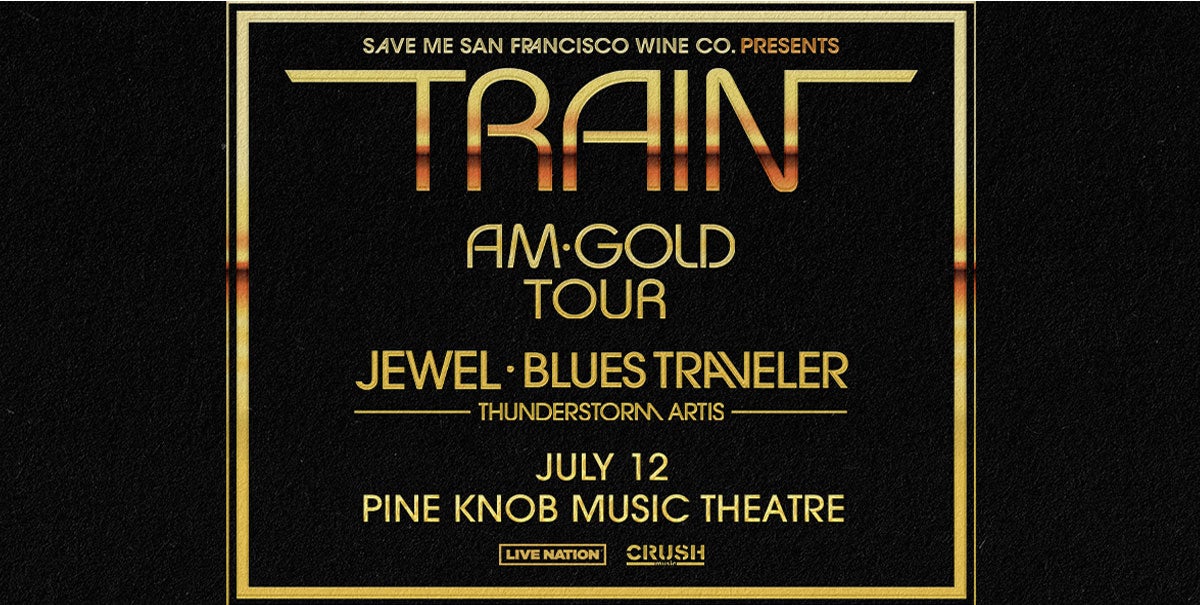 Of the upcoming tour, Monahan says, “2022 is the year of the Tiger. It has begun in a strong, beautiful, and encouraging way and it’s only the beginning. The 2022 Summer AM Gold tour will be all those things and more, as we are joined by our dear friends Jewel and Blues Traveler! What a ride! We can’t wait to see you all out there, dancing and singing along to their amazing music as well as our new album AM Gold. Is it June yet? See you then! Love and miss you all!”

The diamond-selling band has additionally announced today their highly anticipated 11th studio album, AM Gold, is set for release on May 20, 2022 via Columbia Records. AM Gold marks the group’s first release of all-new original music in five years. Giving fans the first taste of what they can expect from the forthcoming studio album, Train today debuted the title track “AM Gold” – available everywhere now – and its accompanying lyric video – watch here.

“Writing songs is hard. Not compared to so many things I suppose, but it’s difficult to create something that you love and then other people love as well. Writing songs for two and a half years in front of video screens instead of being in the presence of other humans has been a long, strange trip. And now here we are,” frontman Pat Monahan shares. “It has to start with love. Love that goes into work comes out of work. We love this song, this album, and our fans. Thank you for waiting so long for us. I think it was worth it. AM Gold! Here we go!“

Since their formation in 1994, Train has had 14 songs on Billboard’s Hot 100, 12 albums on the Billboard 200 albums chart, and has sold more than 10 million albums and 30 million tracks worldwide. In March 2021, the band celebrated the 20th anniversary of their iconic, career-defining album Drops of Jupiter, and the following month, their global hit “Hey, Soul Sister” was certified Diamond by the RIAA, one of just 58 songs in history to reach Diamond status. The band is comprised of frontman Pat Monahan (lead vocals), Hector Maldonado (bass, vocals), Jerry Becker (keyboards, vocals), Taylor Locke (guitar, vocals), Matt Musty (drums), Sakai Smith (backup vocals), and Nikita Houston (backup vocals).

Fans can gain first access to the artist presale beginning Wednesday, February 23 at 10 a.m. local through Thursday, February 24 at 10 p.m. local. To sign up and for more information, visit savemesanfrancisco.com.

Train is a multi-Grammy® and Billboard Award-winning band from San Francisco that has had 14 songs on Billboard’s Hot 100 list since the release of their debut self-titled album. Train’s climb to the top began in 1994, as the original 5-member band tenaciously built a loyal hometown following, leading up to their debut album, released by Columbia in 1998. The tumbling wordplay of “Meet Virginia” gave them their first unlikely radio hit and 2001’s Drops of Jupiter broke them to multi-platinum status thanks to the double-Grammy® Award-winning title song that spent 10 months in the Top 40, has been certified 6x platinum in the U.S., and earned the 2001 Grammy® Award for Best Rock Song. The group won another Grammy® Award in 2011 for their global hit “Hey, Soul Sister” from their multi-platinum album Save Me, San Francisco. “Hey, Soul Sister” was the No.1 best-selling smash and most downloaded single of 2010 and in 2021 achieved RIAA Diamond status. Train has sold more than 10 million albums and 30 million tracks worldwide, with multiple platinum/gold citations, including three Grammy® Awards, two Billboard Music Awards and dozens of other honors. They’ve had 12 albums on the Billboard 200 albums chart with their 2014 Bulletproof Picasso reaching No. 4 in 2012 and 2017’s a girl a bottle a boat debuting at No. 8. “Play That Song,” the lead single from a girl a bottle a boat, went platinum in four countries including the U.S., hit Top 5 on the US iTunes chart, Top 10 at Hot AC radio, and charted at Adult Top 40. Train is set to release their highly anticipated 11th studio album, AM Gold, on May 20, 2022.

Train frontman, Pat Monahan, partakes in other ventures outside of music, including his award-winning wine portfolio, Save Me, San Francisco Wine Co, which was created in 2011 and has sold over 10 million bottles and won over 100 medals. Proceeds from his wine business support Family House, a San Francisco charity that supports families of children with cancer and other life-threatening illnesses.  Monahan has appeared on television and in film with credits that include the 2021 Hallmark Channel original movie, Christmas in Tahoe, inspired by Train’s album of the same name, which he executive produced and starred, Dr. Ken, 90210, CBS’s Hawaii Five-0 and Magnum P.I., The Voice, American Idol, and The Bachelor.