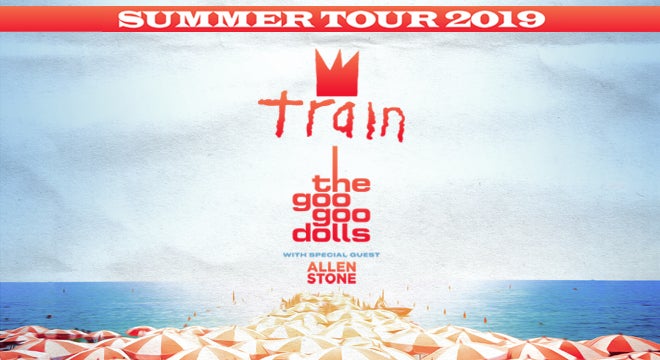 After an iconic 20+ years of music, Columbia Records Grammy®-winning multi-platinum selling band Train released their highly anticipated Greatest Hits album and simultaneously announced a summer tour with co-headliners and Grammy-nominated rockers, the Goo Goo Dolls. The amphitheatre tour will feature special guest Allen Stone and hit over 39 stops across North America. The outing, produced by Live Nation, visits DTE Energy Music Theatre on Tuesday, July 23 at 7 p.m. Fans will have a chance to witness Train’s extensive and critically-acclaimed catalog of hits over the last two decades.

Train’s self-titled debut album, released by Columbia in 1998 was the start of their now accomplished career – the tumbling wordplay of “Meet Virginia” gave them their first unlikely radio hit and 2001’s Drops Of Jupiter broke them to multi-platinum status thanks to the double Grammy® award-winning title song that spent 10 months in the Top 40, and earned the Best Rock Song Grammy® Award. The group won another Grammy® award in 2011 for their global hit “Hey Soul Sister,” the #1 best-selling smash and most downloaded single of 2010, from their multi-platinum album Save Me, San Francisco. Next was 2012's California 37, which launched the double-platinum hit “Drive By” reaching the Top 10 in over a dozen countries. They’ve sold more than 10 million albums worldwide, more than 30 million tracks, 14 songs on the Billboard Hot 100 with multiple platinum/gold citations, including three Grammy® awards, two Billboard Music Awards and dozens of other honors. Train has gone on to receive eight Grammy nominations and has had 12 albums on the Billboard 200 album chart with their 2014 Bulletproof Picasso reaching #4 in 2012 and 2017’s a girl a bottle a boat debuting at #8. Outside of music, Train partake in other ventures outside of music with their Drops of Jupiter® wine portfolio. Proceeds from the wine support Family House, a San Francisco charity that supports families of children with cancer and other life-threatening illnesses. Train’s 2016 project, Does Led Zeppelin II, a cover album in tribute of their favorite band saw 100% of the band’s proceeds going to Family House.

Goo Goo Dolls uphold an unbreakable connection to countless fans. Their influence has been fortified by a catalog replete with the unforgettable smashes “Name,” “Iris” and “Slide,” which were all included in the top 25 of Billboard’s “Top 100 Pop Songs 1992–2012” chart, as well as numerous other hits such as “Black Balloon,” “So Alive” and many more. To date, they’ve sold 12 million albums worldwide, earned four Grammy® Award nominations, and made history by notching 14 Top 10 hits at Hot AC – "the most of any artist in history.” Notably, “Iris” dominated the Hot 100 Pop Chart at #1 for 18 straight weeks. Among 11 full-length records, A Boy Named Goo [1995] went double-platinum, Dizzy Up The Girl went quadruple-platinum, and Gutterflower [2002] and Let Love In [2006] both went gold as Something for the Rest of Us [2010] and Magnetic [2013] bowed in the Top 10 of the Billboard Top 200. 2016’s Boxes attracted the praise of People and Huffington Post as Noisey, Consequence of Sound and more featured them. In 2017, the You Should Be Happy EP spawned another anthem in the form of “Use Me,” which quickly generated three million-plus Spotify streams. Their music has been covered by everyone from Taylor Swift to Leona Lewis. Additionally, they’ve performed for millions at sold out shows around the world. That connection grows stronger in 2018 with the 20th anniversary tour celebrating Dizzy Up The Girl.  Goo Goo Dolls will be releasing their brand new live album The Audience is That Way (The Rest of the Show) [Live], Vol. 2 on November 23 via Warner Bros. Records. The band is currently in the studio working on their 12th studio album.