Home/BECCA KUFRIN AND BEN HIGGINS TO HOST THE BACHELOR LIVE ON STAGE AT THE FOX THEATRE SATURDAY, APRIL 4

BECCA KUFRIN AND BEN HIGGINS TO HOST THE BACHELOR LIVE ON STAGE AT THE FOX THEATRE SATURDAY, APRIL 4

(DETROIT – November 6, 2019) – MagicSpace Entertainment and Producers Mark Swanhart and Guy Phillips are proud to announce that Bachelor franchise fan favorites Becca Kufrin and Ben Higgins will co-host The Bachelor Live on Stage coming to the Fox Theatre in The District Detroit as part of the 2019-20 Fifth Third Bank Fox Theatre Series on Saturday, April 4 at 8 p.m.

Tickets (starting at $35) are on sale now and can be purchased at 313Presents.com, Little Caesars Arena XFINITY box office and Ticketmaster.com.

The nationwide tour – which kicks off February 13, 2020, in Mesa, Arizona and will play in 66 cities including New York City, Los Angeles, Chicago, Philadelphia and Atlanta – brings the most successful romance reality series in the history of television to your hometown to help you find love. The Bachelor Live on Stage fits an entire season of Bachelor drama into one evening, giving members of the audience the opportunity to find love in their own community, complete with rose ceremonies.

“I am thrilled to be part of the Bachelor Live Tour and alongside Ben as we bring all the best parts of the show to your city,” said co-host Becca Kufrin. “The Bachelor experience changed my life in the most amazing ways, so being able to visit cities around the country and allowing others to feel that unique energy, positivity, hope and love (fingers crossed) is something so truly special. Because of Bachelor Nation, I have shared myself and relationships, and all of the ups and downs, tears and smiles, heartbreak and happiness that came with it, and now it’s time for others to share theirs as we kick off this ‘journey’ together!”

“Sharing the stage with one of the most beloved Bachelorettes is an honor! I am thrilled that Becca and I will be co-hosting this tour together!” said Ben Higgins.

Each stage show will introduce one lucky hometown bachelor to local ladies from the audience. Through a series of games, challenges, onstage dates and other fun getting-to-know-you scenarios, the Bachelor will hand the final rose to the woman he’s most compatible with.

And, for the first time ever, Bachelor Nation will have a say! Audience members will help along the journey by asking questions, making suggestions and cheering on the participants on stage. From the first impression rose to group date challenges and the coveted one-on-ones, the production gives fans the chance to watch live from their seats as the journey unfolds on stage.

It’s all the fun, flirting, drama and romance from your favorite TV show in one unforgettable evening! The Bachelor Live on Stage has something for every Bachelor fan, whether you’re looking to find love or have always wanted to get an exclusive peek behind the scenes of your favorite TV show.

The tour is the latest extension of the hit Bachelor franchise, which already includes The Bachelorette and Bachelor in Paradise spin-offs, all produced by Warner Horizon Unscripted Television. The Bachelor television series, heading into its 24th season on ABC, airs in 31 countries around the world.

It was also announced today that Kendra Scott has come on board as the National Tour’s presenting sponsor, bringing exciting surprises and experiences to Bachelor Nation on and off the live stage. To name a few, Kendra Scott will be hosting a launch party with Ben and Becca, pre-show parties in their local stores, ticket giveaways, pop-up shops in select cities throughout the National Tour, and ending with a finale party in Austin, Texas. Follow along on Kendra Scott’s social channels (@kendrascott) for more details and exclusive content from the tour.

Fans can visit bachelorliveonstage.com/apply as of today to apply for a chance to be a part of the journey on stage when the show comes to their hometown.

THE BACHELOR and all related characters and elements © & ™ Warner Bros. Entertainment Inc. (s19) 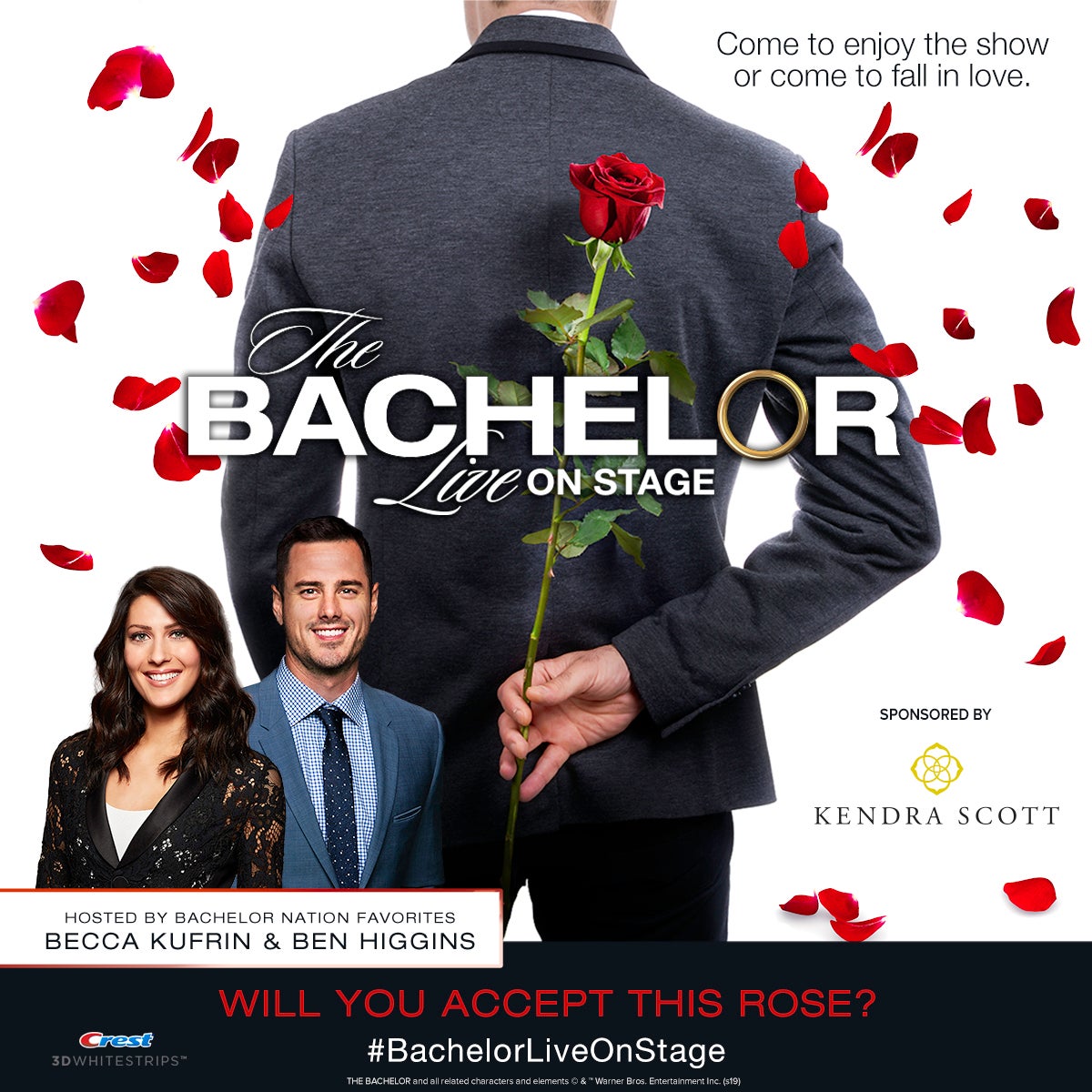