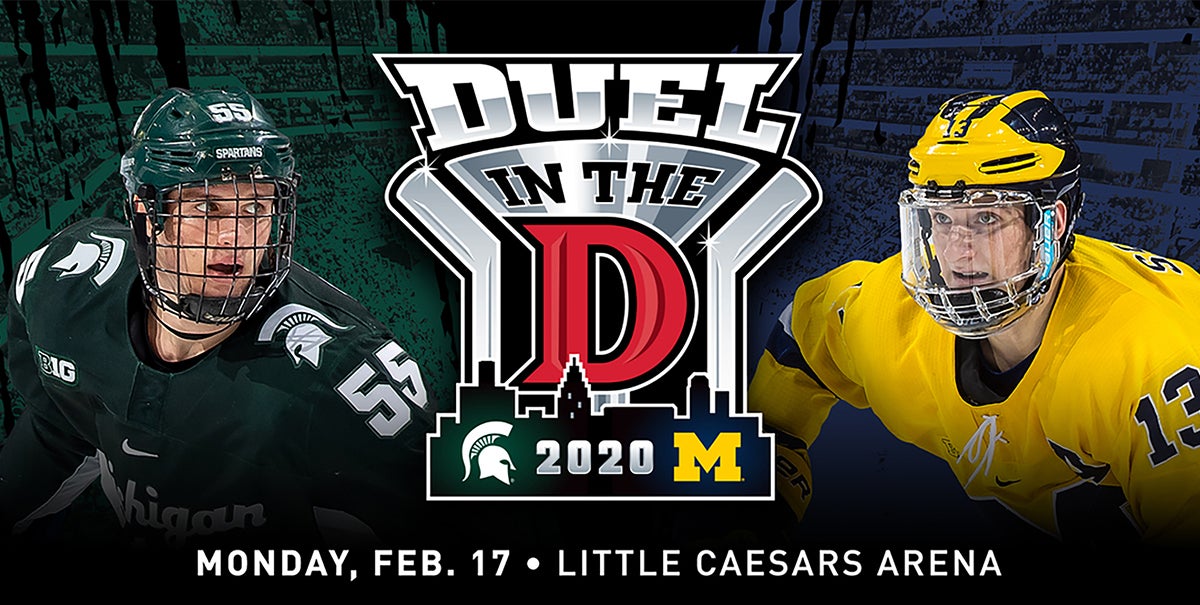 The fans of Hockeytown will be treated to one of the most intense and exciting rivalries in college hockey when the “Duel in The D” returns to Little Caesars Arena in less than a week.

The Michigan Wolverines and Michigan State Spartans ice hockey teams will add another chapter in their storied rivalry and clash for the “Iron D” Trophy on Monday, Feb. 17 at 7 p.m.

The “Duel in the D” matchup features the most-played rivalry in college hockey. Monday’s contest will be the 323th all-time meeting between the historic programs, with Michigan holding a 161-136-24 edge in the all-time series.

Michigan has claimed the “Iron D” Trophy in each of the last three “Duel in the D” matchups (2017-19) at Little Caesars Arena, but the Spartans have defeated the Wolverines in both meetings between the two universities this season. Michigan State went into Yost Ice Arena in Ann Arbor and beat Michigan, 4-3, on Nov. 14, and posted a 3-0 shutout two days later in front of a sellout crowd at Munn Ice Arena in East Lansing. The teams will square off once more on Friday, Feb. 14 in East Lansing before battling for the fourth and final time in the regular season on Monday at Little Caesars Arena.

Michigan State alternate captain Patrick Khodorenko paces the Big Ten’s second-place club with 31 points (15-16—31) which ranks fourth in the conference. The Walnut Creek, Calif., native has lit up the scoresheet since the Great Lakes Invitational at Little Caesars Arena, as he enters Friday’s contest with 13 points (6-7—13) in his last nine games, highlighted by a hat-trick in a 4-2 win over No. 9 Penn State on Jan. 24. Between the pipes, the Spartans are led by senior John Lethemon, whose .942 save percentage and 1.93 goals-against average lead the conference and rank first and seventh, respectively, in the national circuit. Lethemon has yielded two or fewer goals in eight of his last nine games during a hot stretch in which the netminder has logged a .947 save percentage.

The Wolverines are the only team in the Big Ten to give up fewer goals than the Spartans, and sophomore goaltender Strauss Mann has played a key role in Michigan’s 6-1-1 record since the New Year. Named the Big Ten’s Third Star of the Week on Jan. 22, Mann ranks among conference goaltending leaders in goals-against average (2.07, 2nd), save percentage (.932, 2nd) and wins (13, T-3rd). The Wolverine skaters are highlighted by freshman defenseman Cam York, who was selected by the Philadelphia Flyers in the first round (14th overall) in the 2019 NHL Entry Draft. Monday will be York’s first appearance at Little Caesars Arena, as the blueliner missed the GLI due to his participation in the World Junior Championships representing Team USA. The Anaheim, Calif., native enters Friday with 14 points (5-9—14) to lead freshmen defensemen in the conference leaderboards.

The “Iron D” Trophy is on the line for the winner of the “Duel in the D” for the fifth time since the prize’s inception in 2016. The first three “Duel in the D” tilts were decided by one goal before Michigan snapped the trend with a 5-2 win last season.

The “Iron D” Trophy features a forged iron “D” at its center to symbolize the city of Detroit, while the skyline of Hockeytown wraps around the base, including an image of Little Caesars Arena placed at the center. A large cup rests atop the trophy and hockey sticks, a red glass puck and the logos of Michigan and Michigan State line the sides of the trophy. The trophy was designed and built by Erik and Israel Nordin at their studio, the Detroit Design Center.

Tickets for the “Duel in the D” are now on sale and can be purchased at 313Presents.com, Ticketmaster.com, the Little Caesars Arena XFINITY box office or by calling the Red Wings Ticket Sales and Service office at 313-471-7575. 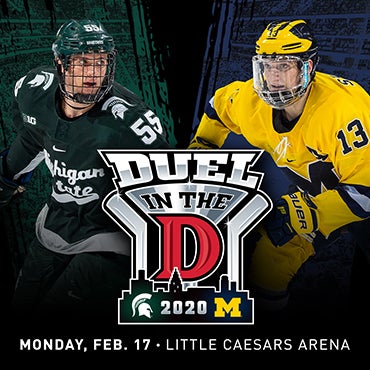 Duel in the D

Duel in the D
Get Tickets