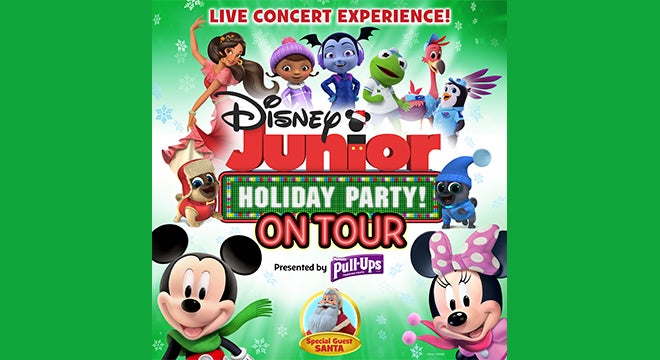 The all-new “Disney Junior Holiday Party! On Tour” Presented by Pull-Ups® will play at the Fox Theatre in The District Detroit on Wednesday, November 27 at 6 p.m.

A variety of VIP packages are also available, including pre-party and after-party experiences with character greetings, as well as the opportunity to take pictures with Santa.

An extension of the popular Pollstar-nominated “Disney Junior Dance Party On Tour,” the 40-date interactive show features favorite Disney Junior characters, including Mickey Mouse, Minnie Mouse, Vampirina and Bingo and Rolly from Puppy Dog Pals performing live on stage to Disney Junior hits and other holiday classics such as “Jingle Bells” and “Deck The Halls.” The show also includes a special appearance by characters from Disney Junior’s upcoming animated series, T.O.T.S. and culminates with a special visit from Santa Claus.

“Disney Junior Dance Party On Tour” wrapped a banner inaugural run, with 140 shows across the country. Bringing to life beloved characters from the #1 preschool television network's hit series The New York Times calls “Disney Junior Dance Party On Tour” a “show that will entertain little ones... weaving heroes and heroines from different television series into a seamless ensemble."

Any Child who has reached their 1st birthday must have a ticket to enter the theatre.